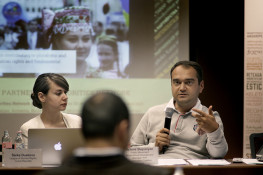 The Visegrád countries (the Czech Republic, Hungary, Poland and Slovakia) adopted the anti-discrimination legislation in the early 2000s in the framework of the European Union accession process. The Eastern Partnership countries (Armenia, Azerbaijan, Belarus, Georgia, Moldova, Ukraine) are in different stages of building this framework and implementing the law. What can they learn from the experience of the Visegrád countries? How can they better promote the recognition of the anti-discrimination instruments among minorities?

The aim of the conference was to share experiences of and strengthen networking among minority representatives, civil society organizations and decision-makers on effective implementation of the anti-discrimination framework guaranteeing minority rights. Experts and NGO practitioners will share their experiences from both the Eastern Partnership and the Visegrád countries. The conference was organized by the Eastern Partnership Minorities Network and Minority Rights Group Europe on 8-9 October 2015 in Budapest, Hungary.

The conference was funded by the European Union and the International Visegrad Fund. More info: www.minorities-network.org