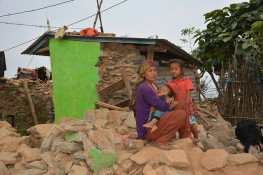 The government of Nepal must urgently address concerns about the new constitution, which fails to adequately protect the rights of minorities and indigenous peoples, or face a devastating humanitarian crisis as winter looms, Minority Rights Group International (MRG) said today.

Nepal is currently stuck in a political deadlock following months of protests over the approval of a controversial constitution that some minorities and indigenous people say sidelines their rights. Ethnic Madhesis have staged a blockade of key border points in southern Nepal since September, preventing essential goods and fuel from reaching the landlocked country, causing the price of rice and cooking oil to skyrocket.

The Indian government has been accused of aggravating the situation by imposing a de facto border trade embargo on Nepal in an apparent display of support for the Madhesis.

‘The Nepali government needs to put petty politics aside, address the grievances of the Madhesi community and indigenous peoples, and work with the Indian government to resolve the escalating humanitarian crisis before it’s too late,’ says Carl Soderbergh, MRG’s Director of Policy and Communications.

Many Dalit labourers have found themselves out of work as a result of the blockade because construction projects have been suspended. Minorities and indigenous communities living in remote earthquake affected areas are facing severe shortages of food and medicine.

‘The ongoing blockade has choked access to vital humanitarian supplies at a time when Nepal’s people are already suffering from the crippling effects of a devastating earthquake,’ adds Soderbergh. ‘As winter descends on Nepal, the country is now facing a catastrophe of epic proportions, with minorities, lower-caste groups and remote indigenous communities being struck the hardest.’

Nepal has struggled to approve a new constitution since 2006, when the country’s long-running civil war finally came to an end. Local activists say the new constitution was rushed through parliament by established political parties in the wake of the April 2015 earthquake without adequately consulting the country’s myriad ethnic and indigenous communities. It reduces the number of parliamentary seats elected through proportional representation from 58 per cent to 45 per cent, which is likely to marginalize indigenous and lower-caste communities further.

It also discriminates against women, who now cannot pass on Nepali citizenship to their children if they marry a foreigner, while Muslims, Christians and other religious minorities in the Hindu-majority country say the constitution offers insufficient protections for them.

Another key point of controversy is the structure of federalism outlined in the constitution, with some minorities and indigenous peoples, including the Madhesis and the Tharus, calling for provinces to be drawn along ethnic lines so as to give them greater political influence.

‘The new constitution has scaled back the rights and representation of key marginalized groups, including women, indigenous peoples, Madhesis and Dalits in favour of the established Hindu-caste elites,’ said Advocate Santosh Rana Magar from Community Empowerment and Social Justice Foundation (CEmSoJ). ‘The Nepali government must urgently seek to resolve these grievances in a transparent, peaceful and inclusive manner. Otherwise, it will be impossible for the country to move past its political gridlock and it could even lead to renewed ethnic conflict.’

The constitution has been praised by some groups for establishing quotas for Dalits, women and indigenous communities to be represented in constitutional bodies, although there is some concern that these provisions do not go far enough.

The political crisis has compounded the effects of the devastating earthquake that struck Nepal in late April, claiming the lives of over 9,000 people.

Filed Under: Asia and Oceania, Nepal