Life after the earthquake for Dalit communities in Nepal 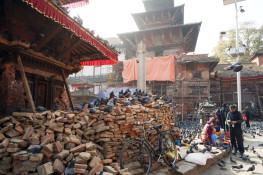 Jasmin Qureshi works in MRG’s Communications team. She recently visited the Feminist Dalit Organization (FEDO) in Kathmandu, Nepal, to find out how Dalit communities have been affected by the May 2015 earthquake.

Dalit communities are among the poorest in Nepal. So when disaster strikes, such as the immensely destructive earthquake in May 2015, they are inevitably one of the worst affected communities.

Buddhibal Magarati, FEDO’s Emergency Support Officer, recounts the time he visited a large Dalit settlement one month after the earthquake.

‘The settlement was far from any accessible roads. I had to walk three to four hours to reach the settlement. Not one house was standing. Each one had fallen down. Survivors were just sitting on the ground; they did not know what to do.’

Since the earthquake struck, government disaster relief support has failed to reach Dalit communities, according to FEDO. Dalits, particularly women, are finding it difficult to access government resources because of their low status and marginalization.

One of the biggest problems has been that Dalits do not have access to information on where to go for essential disaster relief and reconstruction services. This is partly due to lack of information out there for them, but also down to Dalits’ lack of education. When Magarati visited the Dalit settlement that had been destroyed, a key task for him was to give information to the survivors regarding where they could get help.

Another issue has been that they live in remote areas with poor road networks. These areas are also danger zones and prone to landslides. Many Dalit people have to walk for three or four hours to get to the nearest food distribution centres, which are set up in easier-to-reach areas far away from Dalit settlements.

Dalits often do not own land. They are therefore not able to receive government services, such as loans to rebuild homes destroyed by the earthquake, because they are not able to produce a land ownership certificate. Many Dalit survivors are now living in temporary shelters.

‘Dalits are not a priority for the government,’says Magarati, They receive government resources later than everyone else. They are not getting what they need.’

The situation has been worsened by a blockade of key border points in southern Nepal, preventing essential goods and fuel from reaching the land-locked country. Ethnic Madhesis, who have close ties with India, began the blockade in September and it was ongoing at the time of writing. One of the main ways this has affected Dalits is that many are engaged in temporary construction work, and since fuel and other goods are now limited, many building and reconstruction projects have stalled. This means Dalit workers are now out of a job.

FEDO has been working on the ground to support Dalits since the earthquake. In the immediate aftermath they provided disaster relief, distributing food and non-food items. Now in the reconstruction phase the organization is focusing on getting information on key services to Dalits.

A key part of FEDO’s work is advocacy. Recently the organization has been working to increase the representation of Dalits on district disaster risk reduction committees. These committees are in charge of deciding what kind of support is given to survivors, so with increased participation from Dalit communities FEDO hopes their needs and particular situation are addressed. FEDO will also advocate on the new Reconstruction Bill if it is not ‘minority-friendly’ and lobby for proper implementation of the Bill.

‘The earthquake severely affected everyone. But Dalits and other minority groups are particularly affected in comparison with higher-income communities,’ says Magarati. ‘We want government bodies to be inclusive, so that the voice of minority groups are raised and reconstruction programmes will meet their needs.’