Minority Rights Group > News > Publications > Peoples under Threat > Further mass migration inevitable as persecution is ignored in states where peoples are under threat, says MRG New global ranking of countries where civilians most at risk of mass killing

Further mass migration inevitable as persecution is ignored in states where peoples are under threat, says MRG New global ranking of countries where civilians most at risk of mass killing 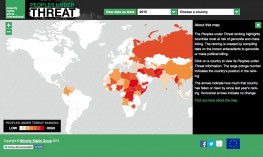 With the refugee crisis far from over, the failure to address persecution in states where peoples are under severe threat makes further mass population movements inevitable, says Minority Rights Group International (MRG).

The international human rights organisation launches today the 2016 Peoples under Threat index and online map, which seeks to identify those countries around the world that are most at risk of genocide, mass political killing or systematic violent repression.

‘Peoples under Threat demonstrates that although the prediction of mass killing has improved substantially since the 1990s, prevention mechanisms are still woefully inadequate. In particular in 2016, there is a global failure to address the needs of highly vulnerable internally displaced populations, making new refugee flight only a matter of time,’ says Mark Lattimer, MRG’s Executive Director.

The global refugee crisis in 2015 was a direct manifestation of the abuses faced by communities in those states now at the top of the index. That the crisis is ongoing is indicated by rising threats in an expanding range of countries in 2016, says MRG.

The Middle East and Africa dominate the 2016 rankings, with Syria topping the table for the second year. Iraq, South Sudan, Libya, Turkey, Ukraine and Azerbaijan are among the most significant risers.

‘Just in South Sudan and Iraq, for example, there are 5 million internally displaced victims of ethnic or sectarian persecution, but the UN’s crisis response plans are barely one-quarter funded. Meanwhile, the situation in the two most significant refugee embarkation points for Europe, Libya and Turkey, is rapidly deteriorating,’ adds Lattimer.

The agony of Syria goes on as a partial ‘cessation of hostilities’ agreed in February continues to break down and the formal entry into the conflict of the US and Russia fails to bring a resolution any closer. Over a quarter of a million people had been killed by August 2015, with the vast majority of civilian casualties caused not by ISIS, but through indiscriminate bombardment by Syrian and Russian aircraft. Over four million people have fled to neighbouring countries.

Christians and other minorities, historically subject to repression under the Syrian government, now find themselves largely confined to government-held areas. Meanwhile, the Kurdish-held cantons in northern Syria, the closest to a functioning democracy the country possesses, are threatened by ISIS to the south and to the north by Turkey.

Ukraine has jumped another six places up the Peoples under Threat index this year. Despite Vladimir Putin’s professed respect for people of all ethnic groups living in Crimea following the annexation of the peninsula in 2014, just two years later Russian government suspended the Crimean Tatars’ representative council on trumped up charges of extremism. In east Ukraine, Russian-backed separatists are waging a war against Ukrainian government forces and paramilitaries, resulting in over 2,500 civilian deaths and 2.5 million people forced to flee their homes.

Political intimidation and tight controls on freedom of expression continue in Azerbaijan, which rose seven places in the index. The biggest risk for mass killing is the rising tension over the disputed region of Nagorno-Karabakh. The intensification of hostilities between Azerbaijani forces and Armenian-backed separatists in April 2016 led to the worst violence for 20 years.

While a significant rise in the Peoples under Threat index provides early indication of risk in the future, the mass killing of civilians is already under way in the 13 states at the top of the index. Somalia, Sudan, Afghanistan, Pakistan, Democratic Republic of Congo, Burma and Iraq consistently dominate the top ten.

For more information, to receive a copy of the Peoples under Threat index, or to arrange interviews please contact the MRG Press Office on press@minorityrights.org.

Filed Under: Genocide, Refugees and Migrants, Peoples under Threat