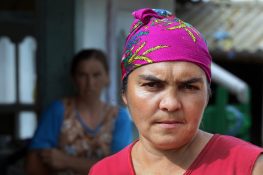 Minority Rights Group International (MRG) calls on the Ukrainian authorities to ensure a fair and transparent investigation into events which led to scores of Roma having to flee a village near Odessa, following the killing of a nine year-old girl on 27 August.

After the discovery of the body of the girl, who was not from the Roma community, in a forest near the village of Loshchynivka, a large crowd of the local residents attacked the homes of Roma in the village. According to media reports, stones were thrown at houses, fences were kicked down and an ‘angry mob’ demanded authorities evict all Roma from the area.

MRG has been informed that the local police, who have remanded in custody Mykhaylo Chebotar, a 21-year-old Roma man, did not attempt to prevent the violence and did not apprehend any of the residents causing damage to Roma homes.

‘These attacks are indicative of the treatment that many Roma in Ukraine experience on a regular basis. In order to repair community relations the authorities must carry out a fair and transparent investigation of both the killing of the young girl, the attack on the Roma community and the inaction of the police,’ says Neil Clarke, MRG Europe’s Managing Director.

Following the violence, the village council made an official decision, signed by the head of the council, to forcefully relocate Roma from Loschynivka. An agreement was also reached that on the morning of 29 August, police would form a safe corridor for Roma to leave and that they would be re-housed. However, most of the Roma families fled the village on their own overnight.

According to local sources there were 24 Roma in Loschynivka, 17 of them were children. After they were forced to leave they moved to nearby Izmail, where they are now staying with relatives.

Meanwhile, Odessa Governor Mikheil Saakashvili made an inflammatory statement on Facebook on August 28 saying that he shared ‘the outrage of people of Loschynivka,’ adding that there were ‘anti-social elements’ in the village who indulged in ‘massive drug dealing.’

‘It is unfortunate that local authorities and law enforcement agencies did nothing to stop this pogrom. Such events cause aggravation of interethnic relations, the consequences of which could be detrimental for Ukraine as a whole,’ says Zola Kondur, Vice-President of the Roma Women Fund ‘Chiricli’. ‘The media consistently emphasize the involvement of Roma in criminal activities, which smacks of ethnic profiling and racial stereotyping. All this comes at a time when the suspect’s guilt has not even been confirmed,’ she added.

In a more encouraging move, the Ombudsman of Ukraine sent a letter to the Odessa administration demanding they put an end to the persecution of Roma and a fair investigation of the case. A representative of the Ombudsman’s office has also visited the suspect in police custody.

‘MRG urges the immediate revocation of the Loschynivka council’s decision to forcefully relocate the Roma, so that they can safely return to their homes,’ says Neil Clarke. ‘The authorities must also take urgent measures to encourage reconciliation between Roma and other Loschynivka villagers.’

Ukraine is home to a rich diversity of ethno-linguistic minorities, with not only a large Russian speaking minority, but also Belarusians, Moldovans, Crimean Tatars, Poles, Hungarians, Jews and Roma among others.

The Roma population is particularly marginalized, and suffers high levels of poverty and discrimination. The European Roma Rights Centre puts the number of Roma in Ukraine at 120,000 to 400,000.

Ukraine rose six places to hold position 16 in MRG’s 2016 Peoples under Threat global survey, which ranks countries where communities are most under threat of mass killing or genocide.