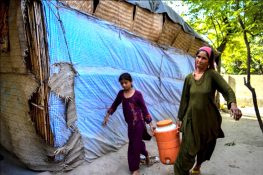 Religious minorities in Pakistan face severe discrimination and persecution, many cases of which go unreported, and often with lack of adequate avenues for redress, says Minority Rights Group International (MRG) in a new online resource pack.

’The delay in Asia Bibi’s case last week brought renewed international attention to Pakistan’s notorious blasphemy laws. Religious minorities continue to be disproportionately targeted by these laws, living in fear of the violence which such allegations often lead to,’ says Carl Soderbergh, MRG’s Director of Policy and Communications. ’But the blasphemy legislation is only one of the many daily challenges confronting Pakistan’s religious minority communities, which MRG’s new online resource makes clear.’

According to Reports from Pakistan: Tracing the challenges of religious minorities, 2016 has not only seen violent attacks against Pakistan’s religious minorities, such as the Easter attack against Punjab’s Christian community, or the targeting of Hazara Shi’a in Balochistan, but also high levels of everyday discrimination providing a backdrop to these incidents.

Though predominantly Muslim, Pakistan includes a wide variety of religious minorities, reflecting its long and complex history. Hindus and Christians make up the largest minorities, but there are also many smaller religious groups such as Bahá’i, Buddhists, Kalasha, Parsis, Sikhs and Zikris.

Between 10 and 25 per cent of the Muslim population are Shi’a – a sect of Islam that, while fully recognized by law, does not in practice enjoy the same status and privileges as the Sunni majority. Even more marginalized are the country’s Ahmadis. While their exact numbers are unknown, they include hundreds of thousands and possibly millions of Pakistanis who, while identifying as Muslims, have for decades been designated ‘non-Muslims’ in the Constitution.

This new online resource highlights ongoing violations of religious freedom and minority rights that have been collected by local rapporteurs, as well as case studies which help bring to the fore the lived realities of Pakistan’s religious minorities.

Pakistan is in 8th place in MRG’s Peoples under Threat 2016 global survey, which ranks countries where communities are most under threat of mass killing or genocide.