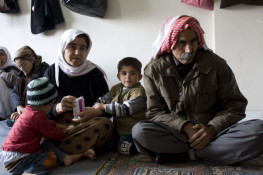 The detention of Gültan Kışanak and Firat Anli, the co-mayors of Diyarbakır Metropolitan Municipality on Tuesday, 25 October 2016, is a very serious violation of human rights and further undermines any hope of a peaceful settlement to Turkey’s Kurdish conflict, says Minority Rights Group International (MRG).

‘The detention of Diyarbakir’s co-mayors is a very serious blow to human rights,’ comments Carl Soderbergh, MRG’s Director of Policy & Communications. ‘At stake are the Kurdish people’s right to elect their own representatives, the right for Kurds to be elected to public office and their right to political participation.’

Kışanak is a prominent former member of Parliament, before becoming Diyarbakir’s first woman mayor in 2014. Along with Anli, her co-mayor, they were taken into custody on Tuesday. They are both members of the pro-Kurdish Democratic Regions Party (DBP). Kışanak had just returned home from Ankara and was arrested at the airport after having testified before a parliamentary commission looking into the failed July coup attempt.

According to a statement by the prosecutor, the two co-mayors are accused of links with the banned Kurdistan Workers’ Party (PKK).  The detentions follow the removal of 28 elected mayors of Kurdish-majority towns and their replacement by government-appointed trustees in September – a move that led to widespread demonstrations. However, so far, the Ministry of Interior has found no evidence to link DBP-led municipalities with the PKK, but the supression still continues.

‘Diyarbakir is one of the largest cities in southeastern Turkey and the country’s biggest Kurdish-majority municipality,’ Soderbergh notes. ‘The arrest of its co-mayors is therefore hugely significant and will undoubtedly lead to a further escalation in the conflict. MRG therefore calls for the urgent release of Gültan Kışanak and Firat Anli and a renewed focus by all sides on dialogue.’

Turkey rose 19 places in MRG’s Peoples under Threat 2016 survey, which ranks countries where communities are most under threat of mass killing or genocide.