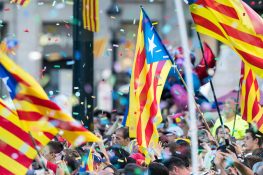 The Spanish police’s conduct during the Catalan independence poll on 1 October 2017 was marred by excessive and unnecessary use of force, Minority Rights Group International (MRG) says.  According to local medical officials, 844 people have been injured, including 33 police.

‘Beating up unarmed protesters is no way to enforce the law,’ stated Mark Lattimer, MRG’s Executive Director. ‘In addition to freedoms of expression and association, minority populations have a right to participate in political affairs – whether they support independence or oppose it.’

While the majority of wounded had minor injuries, television footage showed police officers kicking members of the public and dragging women by their hair. Police used batons to beat firefighters trying to protect a crowd in Girona. Police also opened fire with rubber bullets on people lining up outside a polling station in Barcelona.

The Spanish constitutional court had previously banned the vote.  In the days leading up to the poll, hundreds of national police and Guardia Civil were sent to Catalonia. Thousands of people, including families, occupied polling stations in a largely successful attempt to keep them open. The Catalan regional authorities stated that the police had closed 319 of approximately 2,900 polling stations, whereas the Spanish government said that 92 locations had been shut.

‘Respect for minority rights is crucial to resolving and preventing conflicts,’ added Lattimer. ‘The stance adopted by the Spanish government and the violence used against demonstrators risk having the opposite effect and inflaming tensions further.’

Dozens of Catalan trade unions and other community organisations are planning a region-wide strike on Tuesday, 3 October 2017.