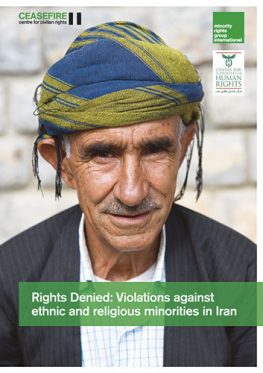 Despite some limited gestures of conciliation since the election of Hassan Rouhani in 2013, Iran’s ethnic and religious minorities are vilified, arrested and even executed on account of their beliefs or identity, says a group of human rights organisations in a new report.

The report finds that Iran’s ethnic and religious minorities are frequently subjected to hate speech and police intimidation, and routinely denied fundamental rights and opportunities.

Rights Denied Violations against ethnic and religious minorities in Iran, by Minority Rights Group International (MRG), the Ceasefire Centre for Civilian Rights and the Centre for Supporters of Human Rights (CSHR), is published in the wake of major clashes between the Iranian authorities and demonstrators from the minority Gonabadi Sufi order, resulting in mass arrests and at least one death.

‘The recent crackdown shows that the Iranian authorities continue to view religious minorities as a security threat,’ says Dr. Shirin Ebadi, Chair of CSHR. ‘The arrest of hundreds of Gonabadi Sufis and intimidation of community members is a violation of their religious freedom and right to peaceful assembly.’

Iran’s Constitution guarantees religious freedoms, but it only extends these rights to Islam and three other recognized religions – Christianity, Judaism and Zoroastrianism – whose members nonetheless face a range of legal discrimination. Meanwhile, practitioners of other faiths, including Bahá’ís, Sabean-Mandaeans and Yarsanis, are left with no guaranteed protections.

The report finds that members of religious minorities – in particular, the sizeable Bahá’í community – are frequently punished harshly with broad charges of threatening public morality or national security, resulting in long prison terms, and even death sentences.

Prison data shows that at least three quarters of Iran’s political prisoners are from ethnic minorities. Arabs, Kurds, Azerbaijani Turks and Balochis have been mistreated, targeted on the basis of their identity and sidelined from education, health care and other basic services, according to the rights groups.

Minority-populated regions such as Khuzestan, Kurdistan and Sistan-Balochestan are underdeveloped and sidelined, with higher poverty levels and poorer health. These inequalities have contributed to profound discontent and resentment, contributing, in part, to the eruption of large-scale protests at the end of 2017. Significant numbers of demonstrators in minority-populated regions were arrested in connection with the protests.

In order for Rouhani’s promise of inclusion to not ring out as empty rhetoric, the organisations urge the Iranian authorities to embark on a more comprehensive process of reform, including equitable economic development and political representation for minorities, as well as the lifting of all restrictions on their religious and cultural rights.

‘Iran’s minorities are caught in a vicious cycle of repression,’ says Mark Lattimer, MRG’s Executive Director. ‘They suffer disproportionately high rates of arbitrary arrest and imprisonment. Then when they protest, they become specific targets.’