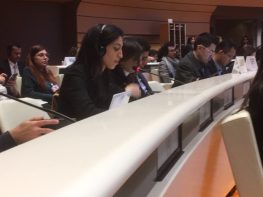 The following statement was delivered at the 11th Session of the Forum on Minority Issues in Geneva on 30 November 2018 by Shikha Dilawri, South Asia Programme Coordinator at Minority Rights Group International. The statement refers to the Forum’s Agenda item 4: Ensuring the right to a nationality for persons belonging to minorities through facilitation of birth registration, naturalization and citizenship for stateless minorities.

Minority Rights Group International stresses that challenges minorities face securing citizenship are not simply  unintended consequences of weak legal or administrative mechanisms. Rather, they are often  linked to long-standing structural, as well as direct and indirect discrimination.

We would like to draw particular attention to the emerging situation in Assam in Northeast India, where over 4,000,000 people could be at risk of statelessness after being left off the National Register of Citizens (NRC) draft list in July 2018. Framed as an overdue enumeration exercise to address Assam’s so-called ‘Foreigner Problem’, NRC policies and procedures have built on and exacerbated existing discrimination along religious and ethnic lines.

Civil society reports disproportionate numbers of Bengali Hindus and Muslims amongst the excluded. Minority women are especially affected: they often lack documentation aligning with the NRC’s restrictive parameters, or are subject to arbitrariness from state actors who lack capacity, harbour discriminatory attitudes, or both.

Assam’s most excluded are therefore vulnerable to detention, deportation, and destitution. This reflects the mutually constitutive relationship between statelessness and discrimination, which has had devastating impacts on minorities ranging the most extreme case of the Rohingya, the case of Dominico-Haitians, to the increasing disenfranchisement of the Marigoli in Uganda.

MRG welcomes Recommendations 58 and 61 of the report of the Special Rapporteur on Minority Issues. However, we emphasise that to ensure measures introduced effectively address minority statelessness and do not further exclusion, alongside issues of access they must simultaneously deal with long-standing discriminatory attitudes and practices by state and non-state actors. Crucially, such efforts should also be proactive, and not wait until a crisis, such as that in Assam, develops.