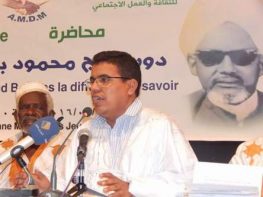 On 3 July 2019, Ahmedou Ould Wediaa, a prominent anti-slavery activist, journalist and member of the opposition party (Tawassoul) in Mauritania, was arbitrarily arrested during a police raid at his home following statements he made criticising the authorities’ response to the election-related protests, and in particular the mass arrests of foreign nationals. Amnesty International, Minority Rights Group and SOS Esclaves and six other Mauritanian human rights groups are calling for his immediate and unconditional release.

He is detained in at a police office in Tevragh-Zeina in Nouakchott. He has not been charged and was questioned without his lawyer. He only had access to his lawyer on 8 July. This case is part of a wider ploy by the authorities to harass, intimidate and crackdown on anti-slavery and anti-discrimination defenders and activists in recent months.

Wediaa is the Vice-President of SOS-Esclaves and a journalist for the Al-Mourabitoune television channel. He has a long history of working on behalf of Mauritania’s minorities and marginalised populations including former slaves belonging to the Haratine community. He has been fighting against descent-based slavery for decades.

Wediaa’s arrest along with that of other activists are widely perceived as a politically motivated attempt to stifle dissent, creating a climate of fear and intimidation in Mauritania. This follows another spate of arrests of anti-slavery and anti-discrimination activists.

Yahya Sy from human rights group COVISSIM was arrested on 3 July and detained for six days before being released without charge. Cheikhna Mohamed Lemine Cheikh, the campaign manager of the Coalition Sawab/Initiative de resurgence du mouvement abolitionniste (Initiative for the resurgence of the abolitionist movement) was arrested in the Ksar neighbourhood in Nouakchott on 24 June and released on 2 July.  Journalist Moussa Camara was arrested on 26 June, accused of questioning the results of the elections and released on 3 July. Samba Thiam, leader of the political party Forces progressistes pour le changement (Progressist forces for change) and anti-discrimination activist was arrested on 25 June following a Facebook post where he questioned “the fairness of the electoral process” and commented on the mobilization of the Afro-Mauritanian community. He was questioned without his lawyer until 1 July. He was released without charge on 3 July after being forced to sign a statement that he would “cease activities leading to extremism and violence”.

The Mauritanian authorities must stop using arbitrary arrests to intimidate, harass and instil fear of reprisals amongst human rights defenders and activists. They must immediately and unconditionally release Ahmedou Ould Wediaa and put an end to the use of the judicial process to harass and intimidate those who speak out against slavery and discrimination in Mauritania, including human rights defenders and political leaders.

Mauritania was the last country to officially abolish slavery in 1981 and to finally criminalise it in 2007 and then again 2015 with stronger legislation. The Mauritanian authorities continue to deny that slavery persists in Mauritania, and people who are still enslaved and human rights defenders aiming to put an end to this practice face reprisals when they speak out.

Mauritania experienced an Internet shutdown following the elections between 23 June and 3 July, severally impeding the work of human rights groups and journalists.