Minority Rights Group > News > Blogs and podcasts > Senegal: the impact of the climate crisis on the fisher community of St. Louis

Senegal: the impact of the climate crisis on the fisher community of St. Louis 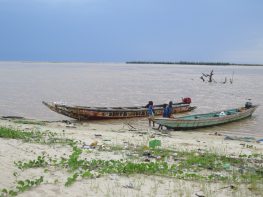 By Carl Söderbergh, Director of Policy and Communications at Minority Rights Group International

How to describe an absence?

That was the question that came to mind when, together with my MRG Africa colleague Hamimu Masudi and a group of EU journalists, I was recently taken by boat out onto the broad expanse of the Senegal river towards the open sea.

I began writing about climate change and human rights over twelve years’ ago, and while in the boat I reflected on the continuing challenge of trying to convey to audiences what gradual shifts caused by the climate crisis imply. Certainly, the more dramatic climate and weather-related events – tropical storms and cyclones, for instance – are attracting increasing public attention. But what about more gradual shifts in the landscape, such as rising sea levels?

And here opened out before me was a troubling emptiness. What had previously been a flourishing community has been replaced by a broad sheet of water. 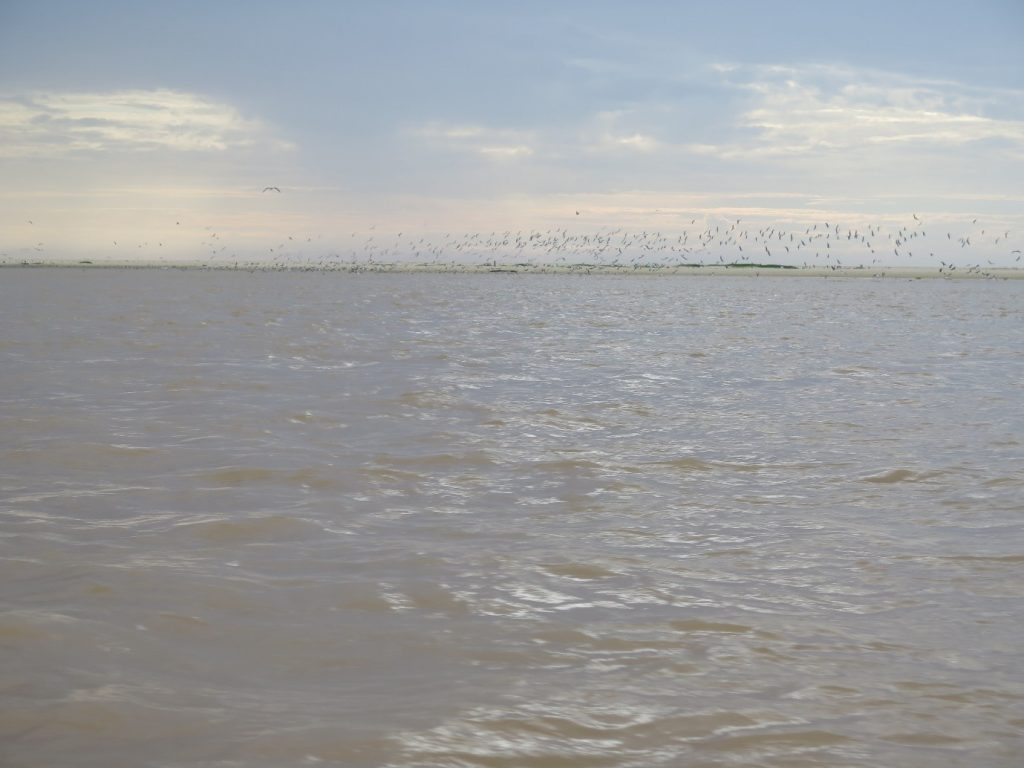 Hamimu and I were accompanying the journalists on a week-long trip to study the many facets of migration in West Africa. Senegal has long been both a country of origin for people heading northwards towards Europe as well as to other countries in the region. It is also an important destination for migrants and refugees from across West Africa. The trip was conducted last month as part of MRG’s EU-funded Media, Minorities and Migration programme. We were starting off in St. Louis, a city which straddles the Senegal river and lies just south of the country’s border with Mauritania. St. Louis is an evocative and thought-provoking place, with its historic centre located on an island in the Senegal river. Tree-lined avenues, pastel-coloured colonial buildings and its UNESCO world heritage status mask a deeply disturbing past, namely the city’s role as a key centre of the Atlantic slave trade. Today, with the broad curving sweep of the river along one side and the Atlantic Ocean on the other, St. Louis remains a city defined by water.

A peninsula known as La Langue Barbarie protects St. Louis from the Atlantic, although, in reality, it is little more than an 18-mile long and narrow sand bank. In some places, the peninsula is only 100 metres across – hardly any meaningful bulwark against the full force of frequent Atlantic gales.

In 2003, the Senegal river basin was hit by unusually heavy rains which caused widespread flooding. In order to prevent the reservoir of Diama Dam from overflowing, its sluice gates were opened. The resulting floodwaters were nearing St. Louis and threatening to overwhelm the city. A decision was taken to cut a four-metre wide breach across La Langue Barbarie in order to let the excess water flow faster out to sea. In their haste, the authorities did not reinforce the breach, and today, it is estimated to be as much as six kilometres wide. In reality, the breach has now become the new mouth of the Senegal river, shifting the point where the river meets the Atlantic 20 kilometres north of where it had been before. It was across those waters that our group was venturing in traditional narrow boats, accompanied by members of the local fisher community.

One of the consequences of the breach was that the fisher settlement of Doune Baba Dieye was flooded by incoming seawater. The former village chief Ameth Sene Diagne described how he had ensured that his 800 neighbours had made it away safely from the rising waters before finally departing himself.

It was Diagne who took us out in small fishing boats to visit what was left of Doune Baba Dieye. Today, there are only two or three walls still standing of what had been a thriving community that had lived off their fishing as well as agriculture. Where two boys were keeping an eye on our boats had been extensive fields, now underwater.

A further issue is that the breach has made the waters at the mouth of the Senegal river far more turbulent and unpredictable. Within just two years of the breach, the tidal range had tripled. Approximately 400 fishermen are thought to have lost their lives in the waters of the breach since it was cut by the authorities. The fact that the mouth of the river is now so much closer to St. Louis means that its wharves are under threat. With the added rush of seawater, the salinity levels of the soil around the city have increased considerably, reducing the amount of land available to agriculture and raising concerns about its freshwater supplies.

Back in the city centre of St. Louis, La Langue Barbarie is home to a largely Lebou fisher population, mainly living in the Guet Ndar neighbourhood facing the Atlantic. Comprising 80,000 people, the community identifies itself as belonging to a minority, and the neighbourhood shows every sign of official neglect. Once we passed the very visible borders of the district, there was far more uncollected waste and fewer storefronts and small businesses than elsewhere in the city, and a population density that is thought to be one of the most intense in Africa.

La Langue Barbarie suffers from very severe coastal erosion, with up to 5 or 6 metres of beach loss every year. Climate change is worsening the process, causing rising sea levels and more extreme Atlantic storms. Gesturing towards fishing boats moored offshore, Guet Ndar residents described to us how, 20 years’ ago, the sea reached 200 or 300 metres further out than it does today. There are more immediate human factors as well. Local officials complain that unauthorised construction as well as infrastructure projects on the other side of the border in Mauritania are disrupting the flow of sediment down the coast and preventing the much-needed renewal of La Langue Barbarie’s natural defenses.

In both 2017 and 2018, Guet Ndar was badly affected by storm surges. Whole sides of a mosque, a school and a long row of houses were torn down by the waves. The devastation reminded me more of what I have seen in my days working in armed conflict settings than any beachfront community I have ever visited. This was not a place that had seen any fighting, however, but rather a neighbourhood facing the combined forces of the Atlantic and the escalating climate crisis.

Local residents described to us how, at the time of the storm surges, their houses started crumbling around them. Although there were no fatalities, numerous people sustained injuries and were rushed to hospital. Over 2,500 people have been displaced inland to a camp at Khar Yalla. One of the displaced whom we spoke with sounded very positive, showing us photos on his mobile phone of the home that had been built to rehouse his family. Others were sceptical, saying that their displacement inland and away from the coast will disrupt their centuries-old fishing livelihoods. Having to travel to and from new homes inland will make it even more difficult for the displaced to reach their fishing grounds and maintain their traditional livelihoods. While the French government has promised funding to build a sea wall and more housing for the displaced, locals wonder whether they will actually see any real benefits.

The community is already struggling. Over-fishing by EU trawlers in the 1990’s caused many to migrate. Others found an alternative source of income by using their boats to ferry migrants northwards along the African coast towards Spain. Spanish border control vessels now patrol Senegalese waters, preventing EU-bound migrants from using the sea route and forcing them to pursue the even more dangerous inland crossing over the Sahara towards Morocco and Libya. Of course, this means that the fishermen of Guet Ndar are back to making a living from the sea – with many, especially those who are displaced by the sea, very likely wondering if they should opt to migrate themselves.

The stories told to us about Doune Baba Dieye and Guet Ndar revealed how deeply inter-connected are the climate crisis, human intervention, minority exclusion and migration. Diagne emphasised that he and the other villagers of Doune Baba Dieye have such a long and deep history of life at the mouth of the Senegal river that they could easily have warned the authorities of the consequences of the breach if they had been consulted. But as fisher folk, they were not included in the crisis talks. The inundation of their village as well as the displacement of its inhabitants has led many to migrate elsewhere.

A final question lingers in my mind – we focus so much on migration but what then happens to those who remain? Diagne himself faces a stark problem. At least five of the young men who used to help him crew his fishing boats have now migrated. Displaced further away from the sea and without the crew he would need, he is no longer able to launch his larger vessel, a pirogue, and reach the richer fishing grounds offshore.