Call to Action: EU Member States Should Commit to the Emergency Relocation of Unaccompanied Children from the Greek Islands 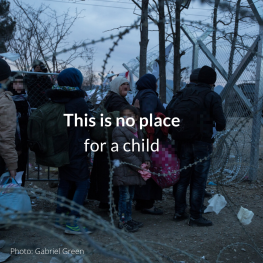 Our Call to Action

We, the undersigned organizations, jointly call on the governments of European Union (EU) Member States to immediately commit to the emergency relocation of unaccompanied children from the Greek islands to other European countries, giving precedence to existing family links and the best interests of the child. Action is all the more urgent in light of the escalating violence on Lesbos and as increased arrivals to the islands could lead to further deterioration of the dangerous conditions in the camps.

Over 1,800 unaccompanied children live in the EU hotspots – Reception and Identification Centers – on the Greek islands. Children are deprived of access to their most basic rights such as shelter, water, food, medical and psychosocial care, as well as education. If each EU Member State relocated just 70 unaccompanied children, these children would no longer be homeless and living in inhumane conditions on the Greek islands.

In October 2019, Citizen Protection Minister Michalis Chrisochoidis sent a letter to all other European Union governments asking them to share responsibility by voluntarily relocating 2,500 unaccompanied children from Greece. On November 6, 2019, he informed the European Parliament’s Committee on Civil Liberties, Justice and Home Affairs that only one country responded.

However, several EU Member States have proven that where there’s a will, there’s a way. France recently committed to accepting 400 asylum seekers. Mayors in Germany have expressed their willingness to relocate individuals from the islands, along with Finland and Ireland, while Serbia and Greece have recently initiated discussion on the transfer for 100 unaccompanied children, providing a basis for further solidarity.

It is important to note that the situation for unaccompanied children in the rest of Greece is similarly alarming. Effective protection for asylum seeking children, including those who are without a parent or caregiver in Greece, is urgently needed. The Aegean islands, which are now at breaking point, are a first start.

The Current Reality for Unaccompanied Children on the Greek Islands

There are now around 20,000 people in Moria camp. There are approximately 4,000 people living behind and on the western side of the Reception and Identification Center (RIC), without access to toilets and electricity, and roughly 9,000 – 10,000 people living in the ‘Olive Grove’, a hillside-area outside the camp on the eastern side of the RIC. Medical actors report to the media that they are treating people for a range of chronic health problems, and according to Médecins Sans Frontières, “seriously ill children…are being deprived of medical care” in Lesbos.

There are now around 7,498 people in the hotspot of Vathy in Samos, which has a capacity for 648 people. There are approximately 400 unaccompanied children living there, most of whom live in the forest on a steep hillside outside the camp. There is only one guardian for the entire camp.

The lack of guardianship as well as the backlog in registration of cases means that hundreds of unaccompanied children on the islands are in danger of missing their chance to apply for family reunification, as children under the age of 15 need to have a legal guardian providing permission for legal assistance by other actors.

Unaccompanied children also face serious challenges as a result of the age assessment procedures carried out in Greece. As stated by the United Nations Working Group on Arbitrary Detention regarding the situation in Greece, “persons claiming to be children are reportedly not generally represented or informed of their rights in a language that they understand during the assessment” and that currently in Greece “examinations are not sufficient to accurately assess a person’s age”.

Overall, there are now more than 38,600 people living in hotspots on the Greek islands, which have a capacity for 6,178 people, while the total number of individuals trapped on the islands is over 42,000. We join together in refusing to accept this situation in a Europe ‘founded on the values of respect for human dignity, freedom, democracy, equality, the rule of law and respect for human rights’. 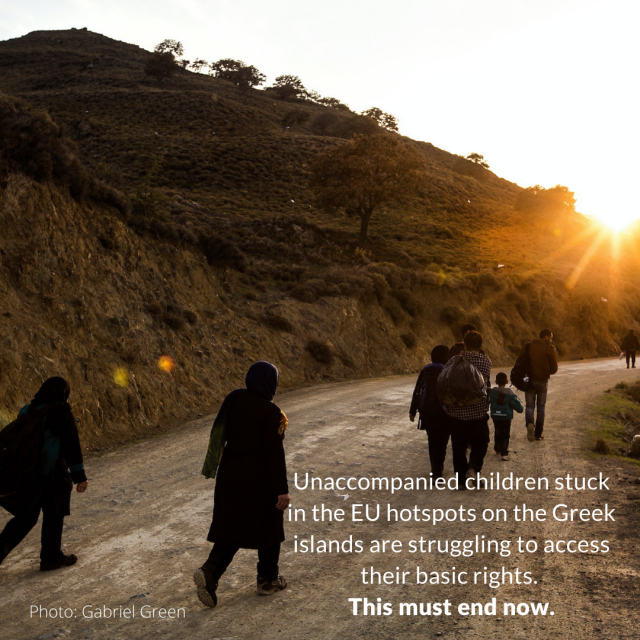 For four years, the EU has centered its response to arrivals of people seeking protection on intensified border controls with the aim of preventing arrivals, as well as through mass containment under the EU ‘hotspot approach’. Originally conceived as open reception and identification centres to support frontline Member States with swiftly processing arrivals of asylum seekers, since the entry into force of the EU – Turkey Statement in March 2016 and the concomitant geographical restriction preventing individuals from leaving the islands during the asylum process, the islands and RICs have morphed into overcrowded camps containing thousands of people in inhumane conditions.

Since their inception, these hotspots have been sites of systematic and sustained human rights violations. The EU Fundamental Rights Agency’s Director Michael O’Flaherty described the EU hotspot Moria, as “the single most worrying fundamental rights issue that we are confronting anywhere in the European Union”.

Among others, the UN Committee Against Torture, the United Nations High Commissioner for Refugees, the Council of Europe Commissioner for Human Rights, Members of the European Parliament, Amnesty International, Human Rights Watch, Refugee Rights Europe, Oxfam, Save the Children, the Danish Refugee Council, and Médecins Sans Frontières have consistently brought to light the challenges, substandard living conditions and human rights violations occurring in these camps.

Transferring unaccompanied children to mainland Greece is not a sufficient solution, as, due to a lack of suitable accommodation capacity, many unaccompanied children there could still face confinement in police stations, living with unrelated adults in camps, or sleeping in the streets, without a guardian. The lack of a permanent relocation system for asylum seekers to other European countries as well as the long delays in processing family reunification requests only makes the situation worse, and transfer of unaccompanied children to other EU Member States is thus critical in order to achieve a durable solution for these children. In line with the Dublin III Regulation, unaccompanied children should first and foremost be relocated to a Member State where they have family members who are able and willing to take care of them.

While the Greek government needs to ensure it meets its legal obligations towards unaccompanied children, it is time for European leaders to take responsibility in providing these children on EU territory with appropriate care and protection.

FOCSIV (partner of the project Faces of Migration)

Kids in Need of Defence

Office of the Dean, Faculty for Education University of Malta

Subscribe to the Minority Rights Group newsletter to be up to date about the work we do.