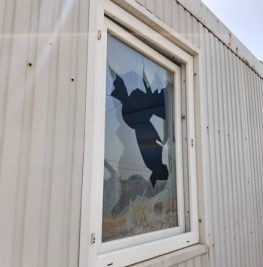 By Meera Thoompail, Intern at Minority Rights Group International. Photo: Broken window of a medical centre in a Roma village in Southern Baghdad.

As the COVID-19 pandemic reveals blatant inequalities between communities’ access to health, the recent attack on a medical centre in a Roma village in Southern Baghdad shows how hate crimes as well as discrimination and neglect from the state greatly exacerbate the vulnerability of minorities to health crises. Iraq’s Roma community, also referred to as Kawliya, make up between 50,000 and 200,000 people, living primarily in southern Iraq.

The attack by an armed group against a mobile medical centre in a village inhabited by Roma in Diwaniya, Southern Baghdad took place in February. The windows of the building were smashed, equipment was destroyed, and medical supplies looted.  Although this was before awareness of COVID-19 was widespread in Iraq, the consequences of the attack are particularly concerning considering the village is now without immediate medical services during this ongoing pandemic. The health risks of this attack are further exacerbated as the village was overlooked during the disinfectant campaigns carried out by the Health Office and Civil Defense. This omission is a continuation of the structural social exclusion and marginalisation by the state that further neglects and puts at risk an already vulnerable minority group.

The medical centre was not immediately rebuilt, and the nearest health services are nearly 40 kilometres away in the city centre. With a global health crisis that has hit Iraq hard with over 2,200 confirmed cases at the time of writing, access to healthcare is of the utmost importance. Assistance from the Health Office to aid in rebuilding the centre was slow, as is frequently the case with the destruction of minority property and infrastructure. Repairs to the centre have only recently started after appeals by the village to multiple stakeholders, including to the minority office of ‏the United Nations Assistance Mission in Iraq (UNAMI).

The Roma community are regularly targeted by extremist groups because of their traditional occupation as entertainers, musicians and dancers. Our Civilian Rights Officer, Mays Al-Juboori, notes that “attacks like these not only show us the discrimination that Roma communities face in Iraq, but they also highlight longstanding socioeconomic grievances. The availability of only one small medical centre within a 40km radius of a minority village is not sufficient to provide adequate access to healthcare. Its destruction, along with the pandemic have only made such inequalities more visible”.

The hate crime nature of the attack is confirmed and aggravated by the threatening message left by the armed group: “Roma don’t deserve medical services”. Roma in Iraq are already ostracized from society at large and messages like these are indeed threats and intimidation designed to terrorise the targeted population. There is currently no law in Iraq criminalizing hate speech, enabling such incidents to go largely unchecked. Furthermore, Iraq is yet to harmonize its domestic law with the provisions of the Convention on the Elimination of Racial Discrimination, which it has ratified. Article 4 of the Convention explicitly calls for the state to “adopt immediate and positive measures designed to eradicate all incitement to, or acts of, [hatred and] discrimination”.