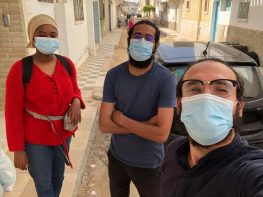 As the world continues to face the COVID-19 pandemic, the claim by some that it would be “The Great Equalizer” has never been further away from the truth. Instead of levelling out the playing field, the virus has disproportionately targeted minority groups, rural communities, migrants and people living in insecure accommodation. This unbalanced consequence has exacerbated the pre-existing health and economic inequalities facing minorities.

In Tunisia, the measures taken by the government to combat the spread of the virus has added to the insecurity of Sub-Saharan African migrants who are risking eviction and direct contact with it. Since the 13th of March, the government has imposed a lockdown in the country and deployed its military to enforce a curfew from 6pm to 6am for each day the situation persists. Through our Anti-Discrimination Points project, we understand that migrants find themselves without State help and no income due to the social distancing orders. This is heightened by the lack of access to information about the virus for those who do not speak Arabic, which prevents them from taking recourses to health services when necessary.

COVID-19 has come in the wake of one of the largest migration crises in North Africa. Migrants from sub-Saharan Africa are fleeing from a multitude of different conflicts and humanitarian crisis, ranging from Boko Haram violence, the Sudanese Civil war and extreme poverty. Often minorities in their national countries, migrants have been travelling to North Africa in hopes of crossing the Mediterranean to Europe. The largest gateway to European shores thus far has been through Tripoli, Libya, where the vacuum of governance has led to large-scale trafficking of migrants.

Tunisia has experienced a second wave of migrants coming from detention centres in Libya, with which it shares a border. According to a Tunisia Red Crescent spokesperson in a report by Politico, as of September 2019 “The situation in Libya is deteriorating and the word is out that there is migrant shelter in Tunisia”. The country is also becoming a preferred destination for economic migrants as there are relaxed visa exemptions and facilitations. Most importantly however, for many, the perception of Tunisia as more open than its neighbouring States has become the reason why it is now seen as a destination rather than a transit point. This has led to a doubling in the number of Sub-Saharan migrants arriving from Libya since 2019, going from 417 to 1008 persons, according to a report in the French newspaper Le Figaro of the FTDES (Forum Tunisien des droits Economiques).

In the midst of a global pandemic, newly arrived and established migrants alike are facing difficulties in accessing healthcare, but also information about the virus as they focus on finding food and avoiding eviction. In a report published by Nawaat, the Vice-President of the Association of Ivorians in Tunisia explained that “[Migrants] are primarily afraid of being evicted for not paying their rent and finding themselves in the street. There is also a dire need for food and health services”. In the same article, an activist explains, saying “Many work for peanuts and don’t have social coverage. Their situation is irregular and they have to pay penalties for having overstayed their residency period. This crisis only makes such already fragile situations worse because these individuals weren’t able to put money aside to get them through the confinement period”.

Nevertheless, solidarity is strong in the country as many Facebook initiatives and associations have formed to help Sub-Saharan migrants cope with COVID-19. Maison du Droit et des Migrations (Terre d’Asile Tunisie) has launched sensibilisation and information campaigns to educate migrants about the virus. They have also launched legal action to help those not able to pay their rent because of the acute unemployment caused by the health pandemic. On the 4th of May they released a platform which allows struggling migrants to ask for help and be put in touch with any citizen association or enterprise giving out aid.  By Ihwem, a youth association, have since the 20th of March, taken charge in the distribution of donations to over 800 beneficiaries. In addition, associations such as Danseurs Citoyens Sud, صوتكم – Soutcom and Ouachma وشمة collaborated to set up a fund for 70 people in the sub-Saharan community of Gabes and Sfax. The Association of Ivorians in Tunisia also helps raise money for rent in Dar Fadhal. All these groups have managed to garner enough support to start collaborating with certain municipalities.

The pressure of civil society organisations has forced the Tunisian government to extend protections to sub-Saharan migrants. As of the 8th of April 2020, the residency stay of all foreigners was extended until the end of the self-isolation period. This means that there will be no financial penalties for exceeding legal stay until the government deems the crisis to be over. This comes in part due to the Ministry of Human Rights being very responsive to the needs of the advocacy efforts taking place in the country.

However, no formal state-wide protections have been given to migrants in relation to non-eviction processes. As these are private relationships between landlords, many are still at risk of homelessness at a time when sheltering is critical. This makes the work of Tunisian civil society organisations that more crucial in protecting Sub-Saharan migrants from economic insecurity and the risks of COVID-19. This cannot be seen as a sustainable model of development as it is the States responsibility to make sure that no one is left behind during this pandemic.