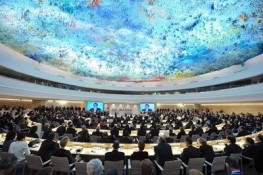 In the space of only a few months, two events have been stark reminders that our inability to achieve racial justice kills.

The global pandemic of COVID-19 has been disproportionately impacting persons belonging to ethnic minorities. Data collected in the United States, in the United Kingdom, in Norway, Sweden and Finland have shown that ethnic minorities have suffered infection and death rates between 2 and 10 times higher than the rest of the population.

Now, the question is why is that? Studies suggest that the disproportionate impact of the pandemic on ethnic minorities is due to a complex set of factors, including overrepresentation in frontline occupations, lack of adequate housing, poverty, underlying health conditions, experiences of deep-rooted racism in healthcare, and sometimes state failure to provide culturally sensitive public health messaging… Many of these underlying factors speak to the fact that ethnic minorities continue to be economically and socially marginalized. For many, this has meant more vulnerability to the virus, and ultimately more lives lost.

The second reminder that our failure to tackle racial discrimination kills came with the videotaped murder of George Floyd by a police officer in Minnesota. The murder echoes similar tragic killings by police officers of unarmed Black or Hispanic Americans, such as Breonna Taylor, Eric Garner, and Philando Castile, which have consistently been met with a lack of transparency and with impunity in the United States. It also resonates in many countries where societies struggle with their own racial biases, prejudices inherited from our histories and systemic discrimination, affecting many aspects of the lives of people of African descent and other minorities. Popular protest movements that have erupted in the US and many other countries should inspire us all to act urgently to tackle these long-standing challenges.

Minority Rights Group calls on this Council to step up its efforts to address the scourge of racism and racial discrimination. Tomorrow’s urgent debate is only a first step and should be followed by robust initiatives aiming at the elimination of racial discrimination, in law enforcement and beyond.