UN plan to protect 30 percent of the planet by 2030 could displace hundreds of millions, NGOs and experts warn 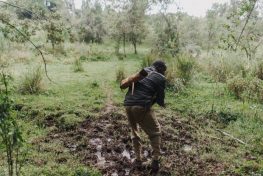 One hundred twenty-eight* environmental and human rights NGOs and experts today warn that a United Nations drive to increase global protected areas such as national parks could lead to severe human rights violations and cause irreversible social harm for some of the world’s poorest people. [1]

In May 2021, the Conference of Parties to the Convention on Biodiversity (CBD) is set to agree on a new target to place at least 30 percent of the Earth’s surface under conservation status by 2030 [2]. This ‘30 x 30’ target would double the current protected land area over the coming decade. [3]

However, concerns about the human cost of the proposal as well as its efficacy as an environmental measure are growing as nature protection in regions such as Africa’s Congo Basin and South Asia has become increasingly militarized in recent years. A series of recent exposés have revealed that communities continue to be forcibly displaced and dispossessed to make way for protected areas and face severe human rights violations by heavily armed anti-poaching agents. [4]

In a letter to the CBD Secretariat (updated version here), the NGOs warn that as many as 300 million people could be affected unless there are much stronger protections for the rights of indigenous peoples and other traditional land-owners and environmental stewards. [5]

Environmental groups have also stated that ‘fortress conservation’ found in much of the Global South is failing to prevent the rapid decline in biodiversity, citing how typically heavy-handed enforcement can turn local people against conservation efforts and could actually hasten environmental destruction. [6]

Any further increase in protected areas, they argue, must first be preceded by an independent review into the social impacts and conservation effectiveness of existing protected areas.

Stephen Corry of Survival International, said: “The call to make 30% of the globe into “Protected Areas” is really a colossal land grab as big as Europe’s colonial era, and it’ll bring as much suffering and death. Let’s not be fooled by the hype from the conservation NGOs and their UN and government funders. This has nothing to do with climate change, protecting biodiversity or avoiding pandemics – in fact it’s more likely to make all of them worse. It’s really all about money, land and resource control, and an all out assault on human diversity. This planned dispossession of hundreds of millions of people risks eradicating human diversity and self-sufficiency – the real keys to our being able to slow climate change and protect biodiversity”.

Joshua Castellino of Minority Rights Group International said: “Urgent measures are needed to arrest the imminent breach of planetary boundaries. This requires reigning in those responsible for its continued destruction, replacing them with those responsible for its safeguarding. Making indigenous peoples pay the price for destruction that took place in the drive towards overconsumption for profit by others constitutes not only the bullying of the dispossessed, it reifies the quest for profit over people privileging western ‘scientific approaches’ borne out of commerce, over the traditional knowledge it subjugated, dominated and nearly destroyed on the path to this precipice”.

[2] The target is stated in a draft agreement called the ‘Post-2020 Global Biodiversity Framework’, which is currently being prepared and negotiated amongst the 186 governments which are signatories to the Convention for Biological Diversity (CBD). See here for the full document.

[3] The CBD, adopted in 1992, is seen as the key document regarding sustainable development and provides the overarching international policy framework for conservation. The 196 Parties to the CBD are set to adopt a post-2020 global biodiversity framework in May 2021. The draft agenda includes the objective to protect at least 30 percent of all land and seas by 2030, a near doubling of the current target of 17 percent (Aichi Target 11).

[5] Based on a paper published in the academic journal Nature analysing the areas most likely to be put forward as protected areas, it is estimated that the new target could displace or dispossess as many as 300 million people. See, Schleicher, J., Zaehringer, J.G., Fastré, C. et al. ‘Protecting half of the planet could directly affect over one billion people’. Nat Sustain 2, 1094–1096 (2019).

[6] See, for example, the community-managed forests that could be threatened by conservation land grabs in the Congo Basin.

Photo: The Ogiek are one of Africa’s last hunter-gatherer populations – Credit: Diana Takacsova