From hate to violence: Preventing & countering hate speech against minorities in South Asia 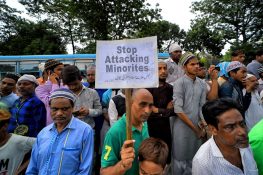 South Asia has experienced heightened incidence of hate speech and incitement to hatred, with grave consequences for its minorities – religious, ethnic, linguistic or gender-related. Majority groups across the region have historically attempted to perpetuate and reinforce stereotypes and prejudice against minorities, through open use of hateful rhetoric, including by senior leaders, as well as more covertly, e.g. through altered school textbooks. New opportunities provided by digital technology – television and social media platforms, in particular – have been expertly leveraged to this end. These are often orchestrated campaigns, that contribute to encouraging or justifying discrimination, hostility and violence against minorities.
This side event to the 46th session of the Human Rights Council will be an opportunity to discuss the challenge of hate speech against minorities in the South Asian context, with a particular focus on three countries where this issue is particularly acute (Pakistan, India, Sri Lanka). Practitioners from the region and UN experts will discuss the situation and will propose recommendations to prevent escalation, counter hate speech and address its consequences.
Panellists include: