A welcome judgment but not yet justice 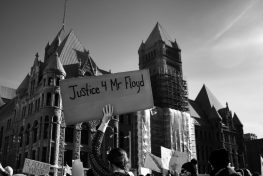 The guilty verdict brought by a jury in the United States against ex-police officer Derek Chauvin for the murder of George Floyd last year represents a moment of relief and catharsis for many, but especially Black Americans.

The guilty verdict is welcome, of course. The evidence was plentiful and already there, for all to see.

The verdict also sends a strong message against attempted defense strategies, within and outside the courtroom, that shift the blame of such crimes from the perpetrator of deadly violence onto the victim. In this case, that perpetrator was a white police officer, part of a system that has long protected those holding badges that symbolize their ‘duty to protect’, from being held accountable. Even the Minneapolis chief of police, Medaria Arradondo, testified against Chauvin, stating that the accused had violated numerous police protocols. His testimony against Chauvin, along with that of other police officers, shows a crumbling in acceptance of that status quo.

This moment warrants reflection. To begin with, it should not have taken George Floyd’s death for that crumbling to commence. Let’s ask ourselves, honestly, would we have reached here without George Floyd’s death being recorded? If the world had not seen it with their own eyes, or heard it with their own ears? African Americans in the United States have been speaking out against the injustices they face on a daily basis for centuries, and though there have been milestones for change achieved, they still struggle to be heard. To be believed.

There is so much work to be done.

Fundamentally, the US criminal justice system is marred by deeply ingrained structural racism. Predominantly Black neighbourhoods are under-policed in addressing emergency community needs but over-policed when it comes to establishing control. In encounters between police and Black community members, officers are far quicker to escalate their use of force dramatically than they are with white people. A recent study showed that stun guns, police dog bites, pepper spray, kicks and punches were applied by police 2.7 times more to Black people than to whites. The study confirmed that some Black and poorer neighbourhoods faced police stops more than 10 times the rate of white and wealthier neighbourhoods.

And then there are the racist attitudes of individual police officers. The aftermath of the 6 January 2021 storming of the US Capitol by right-wing Trump supporters, led to six US Capitol police being suspended, with 29 others placed under investigation. One officer took a selfie of himself with the rioters, while another directed attackers around the building. At least seven officers from other parts of the country were identified as having taken part in the assault.

Of course, other Capitol police served valiantly, but the dubious record of many of their colleagues and the presence of police among the rioters speaks volumes of the urgent need to tackle racism and white supremacy among police across the country.

We must also recall the ever-lengthening roster of victims. Since the start of Chauvin’s trial until this week, at least 64 victims have been killed by US police, with over half of the victims being Black or Latinx people. By last Saturday, the average was more than three killings a day.

Each of these cases deserves proper scrutiny. US law generally holds that police can use lethal force if they have a ‘reasonable’ fear of ‘imminent’ injury or death for themselves or another person. The trouble is that juries tend to agree with police in their determination of reasonableness. It is on this basis that there is the near-complete impunity that US law enforcement currently enjoys.

Today, the US Justice Department announced that it will launch an investigation into the Minneapolis Police Department to assess whether it ‘engages in a pattern or practice of using excessive force, including during protests.’ This probe is a good sign towards ensuring continued public scrutiny of powerful institutions’ role in upholding structural racism in the US, and one step towards ending a culture of impunity within US law enforcement bodies.

At Minority Rights Group, we join the family and others fervently hoping that Chauvin’s guilty verdict can be the turning point to bring about real change. It should serve notice that every police officer in the US will face justice when they ramp up their use of force. Until that moment, justice may have been served for George Floyd but not for the Black and other minority communities in the US.