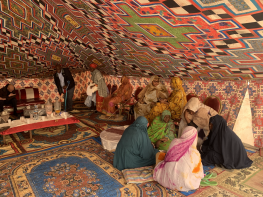 Minority Rights Group International (MRG) is deeply concerned about the arrests of a former slave, a journalist and two human rights defenders whose work is linked to the fight against descent-based slavery in Mauritania.

A woman recently released from slavery, a Swiss journalist and two members of a Mauritanian non-governmental organization and MRG partner SOS-Esclaves (SOS) were rounded up by the authorities on 16 April 2021 and detained for nearly 72 hours.

According to SOS-Esclaves’ lawyers who secured their release, the four were arrested for allegedly ‘inciting racism and discrimination’.

The arrests appear to be linked to an incident at a wedding in Oudane in the Adrar region of the country. At this wedding, an arrangement had reportedly been made by the groom’s family, to offer as part of the dowry, the woman as a ‘slave’ along with ‘a herd of camels and a horse’. In a twist of events, a member of the bride’s family leaked the plans to SOS, which made them public.

On 4 April, the National Human Rights Commission (CNDH) released a statement—saying the incident had been investigated and subsequently alleged that no mention of ‘slave’ or ‘glorification of slavery’ had been made at the wedding ceremony.

While the Mauritanian government denies the existence of slavery in the country, the practice is still prevalent, albeit secretly. MRG is concerned that such arrests erode progress being made to completely eradicate the practice in Mauritania.

MRG adds to the voices of our partners – Anti-Slavery International, SOS and the Association des Femmes Chefs de Famille (AFCF), condemning these and other arrests by the Mauritanian authorities against those working to eradicate slavery practices and other human rights violations in the country.

Photo: A break during one of our training sessions in front of SOS-Esclaves’ office. Credit: MRG.