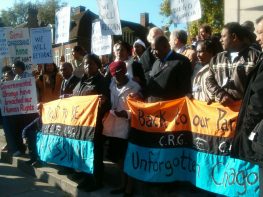 In 1965, the UK formed a separate colony, called the British Indian Ocean Territory (BIOT), by separating the Chagos archipelago from Mauritius. The UK went on to remove the Chagossians (the indigenous people of the islands) from the BIOT by, inter alia, refusing to allow them to return from visits to Mauritius and by removing employment by acquiring, and closing down, the plantation company which provided for their employment. The removal of the Chagossians was further supported by an ‘Immigration Ordinance’ issued in 1971, requiring the compulsory removal of the whole of the population of the territory, including all the Chagossians. Subsequent UK Government orders have continued to prevent the right of return. The Chagossians have unsuccessfully sought recourse for their expulsion through domestic legal avenues. In November 2016, the UK Government announced that it does not intend to reverse its position on resettlement.