Burundi is a small country on the northern shores of Lake Tanganyika bounded to the north by Rwanda, the west by the Democratic Republic of Congoand the east by Tanzania. It has the second highest population density in Sub-Saharan Africa.

The origins and evolution of Burundi society are the subject of dispute; however, the popular conception of Tutsi pastoralists dominating Hutu agriculturalists does little justice to the complex and multi-faceted hierarchies of Burundi’s pre-colonial kingdoms.

Historically, the potential for conflict between the two main groups was contained by the existence of a princely class, the Ganwa, who provided an aristocracy for Tutsis and Hutus alike, and were originally seen as distinct from both. For most Hutus and Tutsis relations were comparatively equable and peaceful, with intermarriage common; language and culture are shared. Although in general Tutsis were in a dominant position, status, not ethnic identity, was the principal determinant of rank and privilege.

Burundi (together with Rwanda) was absorbed into German East Africa in 1899 and came under Belgian rule in 1916.

Political conflict in the period immediately preceding Burundi’s independence in 1962 was not primarily along inter-communal lines but between the nationalist Union pour le Progrès National (UPRONA) and the more conservative and pro-Belgian Parti Démocrate Chrétien (PDC). Both parties were effectively controlled by small Ganwa elites and their competition related to comparatively narrow rivalries as well as to ideology. The more radical UPRONA, led by Prince Louis Rwagasore, the eldest son of the King, gained a massive victory in pre-independence elections in 1961, not least because its stance was seen as more sympathetic to Hutu interests. Two weeks later Rwagasore was assassinated following a PDC plot, and in the absence of his unifying influence politics became increasingly polarized along communal lines. In the early years of independence Burundi remained a monarchy, with the King attempting to assume some degree of ethnic balance in the administration. However, the assassination of the Hutu Prime Minister, Pierre Ngendadumwe, in 1965 led to a political crisis and a large Hutu majority in parliament after the resulting elections. The King then appointed a Ganwa Prime Minister, precipitating an attempted coup by a faction of the Hutu-dominated gendarmerie which was repressed with great violence: virtually the entire Hutu political elite was massacred, along with thousands of their supporters. For over twenty years Hutu involvement in Burundi’s political life was minimal.

Burundi has witnessed extremely high levels of violence, mostly perpetrated what was an overwhelmingly Tutsi army, against the (numerical) majority Hutu population. Hutus and Tutsis are best considered together since their situation and prospects are integrally linked.

Twa, now a tiny group of indigenous peoples are descended from the original forest-dwelling inhabitants of Burundi.

In 1966 the King was deposed by his son who in turn was deposed in a military coup led by Captain Michel Micombero. Burundi was declared a republic; purges of Hutu army officers consolidated Tutsi supremacy. In 1972, following another attempted revolt, Hutus were brutally massacred on an enormous scale: between 100,000 and 200,000 were murdered, with educated Hutus systematically targeted. Some 300,000 fled to neighbouring countries. The failure of the international community to react to these atrocities compounded the outrage: this genocide proved a watershed for the whole region, compounding mutual fear and suspicion between Hutus and Tutsis, and generating a traumatic and long-lasting impact on Rwanda as well as Burundi. No one has ever been called to account or prosecuted for these crimes, reinforcing a culture of impunity that has continued ever since. The massacres, followed by pervasive discrimination against Hutus, most significantly in educational opportunities, consolidated wholesale Tutsi domination of economic and political life. Pressure on land, with many cases of expropriation by Tutsi elites, became a particular focus for Hutu resentment.

Micombero was overthrown by another military man from Bururi Province, Jean Baptiste Bagaza, in 1976 and the pattern of Tutsi domination continued.. Bagaza invested in big development projects but the economy stagnated in the face of low coffee prices (affecting the mainly Hutu peasants). Bagaza’s attack on the churches added to the tension and led to a further coup from within the army in 1987 which brought Pierre Buyoya to power. In 1988 conflict erupted in two northern districts; in the resulting repression perhaps 15,000 people were killed, almost all by the army, and almost all Hutus. Around 60,000 fled to Rwanda. Buyoya eventually responded by opening a national debate on the need for unity, and he began readmitting Hutus to positions of political responsibility. The civil service began to appoint Hutus in large numbers, and there was less educational discrimination. However, the overwhelmingly Tutsi army resisted change and elements within it became increasingly disaffected with the reforms, attempting coups in 1989 and 1992.

Under continuing pressure from donor countries Buyoya carried on with his reforms, leading to presidential elections in June 1993. Melchior Ndadaye, a Hutu, decisively beat Buyoya, and his party, the Front Démocratique de Burundi (FRODEBU), which broadly represented Hutu aspirations, won the subsequent parliamentary elections by a landslide. Sections of the unreconstructed Tutsi army remained violently opposed to these developments. President Ndadaye and several of his colleagues were killed in an attempted military coup in October 1993, leading to Hutu uprisings and killings of around 100,000 Tutsis in the provinces. Massive army reprisals followed in which tens of thousands of Hutus lost their lives. Although the coup was officially crushed within days, and surviving members of the government reinstated, FRODEBU had lost much of its power and credibility and the reforms went into reverse. The replacement President, Cyprien Ntaviyamira, was killed along with his Rwandan counterpart when their plane was shot down over Kigali in April 1994. There was long delay in confirming the appointment of his successor, Sylvestre Ntibantunganya, like both his predecessors a Hutu from FRODEBU, who had little real power.

The resulting genocide and war in Rwanda led to waves of refugees; first Rwandan Tutsis fleeing the massacres, later Rwandan Hutus fleeing the advance of the victorious Rwandan Patriotic Front. The refugees moved into a country starkly polarized first by the fighting following the October 1993 coup attempt and later by the Rwandan genocide itself. In Burundi de facto segregation of Tutsis and Hutus had taken place, with Tutsis fleeing the countryside in search of military protection in towns, and Hutus fleeing from towns to countryside to escape the soldiers; in Bujumbura Tutsis ‘ethnically cleansed’ Hutus (and later immigrants from Zaire – today’s Democratic Republic of Congo) from several neighbourhoods. As was the case in earlier massacres, Hutu and Tutsi militants accused Twa people of loyalty to the other group. Caught in the middle, Twa were killed in large numbers.

The Rwandan genocide reinforced the belief of many Tutsis that only the army stood between them and a fate similar to that of the Tutsis of Rwanda. Yet Hutus were no less certain to continue to respond to the injustices and oppression they had suffered for so long. For many Hutus the massacres of 1965, 1972, 1988, 1991 and 1993 were perceived as part of a continuing genocidal plan by Tutsi extremists, The continuing violence of the military and the growing influence of Hutu militias signified a drift to all-out civil war.

The conflict continued throughout 1995, with an escalation in the activities of Hutu militias and an estimated 10,000 people killed. Although most immigrants to Burundi, including long-standing Swahili-speaking communities in Bujumbura, tried to avoid taking sides in the country’s conflicts, they remained vulnerable to the suspicions of Tutsi extremists unwilling to trust any but fellow-Tutsis, a situation reinforced by the tendency of most ‘outsiders’ to show some sympathy for the plight of the Hutus. In 1995 immigrant communities were expelled from parts of Bujumbura as part of a process of making all but outlying areas of the city almost exclusively Tutsi.

In July 1996, Pierre Buyoya, supported by the military, overthrew President Ntibantunganya. This led to international protests and sanctions, and, although security improved in the towns, the imprisonment, exile or death of many Hutu politicians encouraged support for the Hutu militias. Killings continued in the countryside and by the end of the year prospects for peace seemed ever more remote.

The reforms of the first Buyoya regime had opened a national debate on the overwhelming need to overcome ethnic distrust – indeed, for the first time there was official recognition of the ethnic dimension to the conflict. The 1993 election and related developments had improved the comparative position of the Hutu majority. Some hoped that a degree of equity in the ‘balance of terror’ might even result in a compromise settlement. The attitude of the army and the 1996 coup set this back a few years.

The civil war dragged on, despite a 1998 agreement between Buyoya and a new, opposition-dominated parliament that led to his formal inauguration as president. In 2000 the Arusha Accords were signed – hammered out in negotiations led first by former president Nyerere of Tanzania and later by Mandela of South Africa. Although the two main Hutu militias refused to take part, a three-year transitional, multi-ethnic government was created, with Buyoya serving for the first 18 months and Domitien Ndayizeye for the remainder. In November 2003 one of the main Hutu militias, the Forces for the Defence of Democracy (CNDD-FDD), signed on and joined the government. UN peacekeepers arrived in 2004, and the end of the year saw the launch of a disarmament, demobilization and reintegration process.

Nkurunziza, S., Towards Social and Economic Inclusion of Minorities: A Case of the Twa People in Burundi, unpublished MSc thesis, University of Dublin, 2002.

Nkurunziza, S., Towards Social and Economic Inclusion of Minorities: A Case of the Twa People in Burundi, unpublished MSc thesis, University of Dublin, 2002. 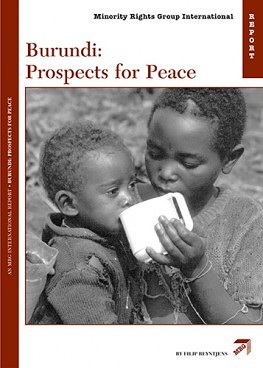 A lesson on justice in Burundi

Lucy Claridge, MRG’s Head of Law, visits a Batwa community in Burundi and learns that access to justice can seem… 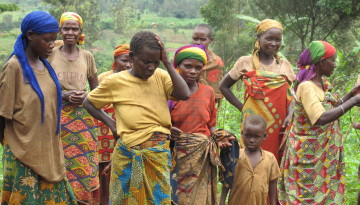 Burundi at tipping point, government and international community must do more to prevent escalation of conflict, warns MRG

Ahead of the United Nations Security Council meeting with the government of Burundi today, Minority Rights Group International (MRG) warns… 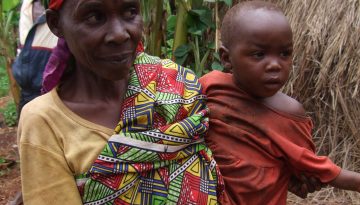