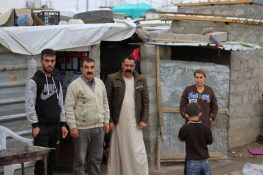 The programme was implemented in coordination with the Ceasefire Centre for Civilian Rights, the Asuda Organization for Combating Violence against Women (ASUDA), Center for Supporters of Human Rights (CSHR) as well as UNHCR as an associate partner. It aimed to strengthen and defend the capacity of human rights defenders’ organisations to monitor and report human rights violations against vulnerable civilians (including women and minorities) in Iraq and Iran and to advocate for increased protection by local, national and international actors.

This work was supported by the European Instrument for Democracy and Human Rights (EIDHR) and was carried out over 42 months, ending 30 June 2020. In Iraq, the project was implemented in the Kurdistan Region as well as Baghdad, Maysan, Babel, Al-Qadisiyah, Anbar, Kirkuk, Nineveh, and Basra governorates.

Overall findings of the report indicate that this project was largely successful and highly relevant to the country contexts. MRG’s project design was appropriate for the objectives, building on previous work in Iraq. The project implementation was able to keep as closely as possible to its timeline even with sudden changes within the countries. Moreover, MRG was noted to respond to contextual changes with appropriate project adaptations, thereby maintaining its relevance despite the fluctuating circumstances and challenges.

MRG was able to strategically position itself to respond to growing information needs and maintain a consistent position in terms of factual knowledge, expertise and advocacy. Additionally, partners as well as microgrant recipients reported having very positive and strong working relationships with MRG throughout the project, and further collaborations are already in motion.