Minority Rights Group > Publications > Central African Republic on the Eve of Elections: From Crisis to Reconciliation

Central African Republic on the Eve of Elections: From Crisis to Reconciliation 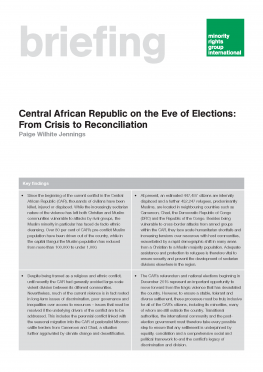 Since the beginning of the current conflict in the Central African Republic (CAR), thousands of civilians have been killed, injured or displaced. While the increasingly sectarian nature of the violence has left both Christian and Muslim communities vulnerable to attacks by rival groups, the Muslim minority in particular has faced de facto ethnic cleansing. Central African Republic on the Eve of Elections: From Crisis to Reconciliation highlights the continued challenges facing the country as it attempts to move forward towards a stable, diverse and tolerant future.

The briefing outlines how much of the current violence is in fact rooted in long-term issues of discrimination, poor governance and inequalities over access to resources – issues that must be resolved if the underlying drivers of the conflict are to be addressed. This includes the perennial conflict linked with the seasonal migration into the CAR of pastoralist Mbororo cattle herders from Cameroon and Chad, a situation further aggravated by climate change and desertification.

It also highlights the importance of a regional solution to the crisis: with more than half a million refugees at the end of 2015 located in neighbouring countries, a large proportion of whom belong to minorities, the security and humanitarian impacts of the recent violence are now being felt beyond the CAR’s borders. Adequate protection and assistance to refugee communities in Cameroon and other bordering states is therefore essential to ensure the divisions created by sectarian violence in the CAR are not replicated elsewhere.

The referendum and national elections beginning in December 2015 represent an important opportunity to move forward from the tragic violence that has devastated the country. However, to ensure a stable, tolerant and diverse settlement, these processes must be truly inclusive for all of the CAR’s citizens, including its minorities. Transitional authorities, the international community and the post-election government must therefore take every possible step to ensure that any settlement is underpinned by equality, conciliation and a comprehensive social and political framework to end the conflict’s legacy of discrimination and division.