Civilian protection in the battle for Mosul: Critical priorities 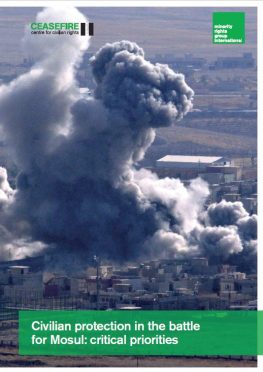 Recent precedents from military operations to retake Iraqi cities from ISIS control, including Tikrit, Ramadi, Fallujah and Sinjar, demonstrate a pattern of repeated failures to implement sufficient measures for civilian protection, both in the conduct of hostilities and in planning for the humanitarian consequences. Given this weight of recent practice, it is feared that thousands of civilian lives in Mosul and surrounding areas are now at critical risk.

Since 2014, ISIS has deliberately targeted civilians on numerous occasions, but parties on both sides of the conflict, including the Iraqi Security Forces and allied Popular Mobilisation Units, are responsible for:

Such conduct, together with the imposition of siege tactics on ISIS-held cities and the intensive bombardment of urban areas by Iraqi and international coalition forces, has combined with the ISIS tactic of using ‘human shields’ to result in thousands of civilian casualties and high levels of civilian suffering. The failure to ensure humanitarian access as well as safe corridors for population flight has also been compounded by the imposition on IDPs by Iraqi and Kurdish authorities of discriminatory documentation, screening and entry procedures at check-points and governorate border crossings.

In the context of military operations to retake Mosul, this report recommends: