Minority Rights Group > Publications > A rights-based framework for minority and indigenous languages in Africa: From endangerment to revitalization

A rights-based framework for minority and indigenous languages in Africa: From endangerment to revitalization 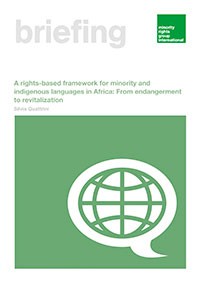 It is estimated that between 6,000 and 7,000 languages are currently spoken worldwide, of which approximately half, if not more, will disappear by the end of this century. A large proportion of these endangered languages are spoken by indigenous peoples and minorities, and are often inseparable from their particular traditions, cultural practices and beliefs. This is especially relevant in the context of Africa, where around a third of the world’s languages are based.

A rights-based framework for minority and indigenous languages in Africa: From endangerment to revitalization demonstrates how language plays a central role not only in the preservation of identity and culture, but also in matters of non-discrimination and access to a variety of rights, including to education and health. Promoting language rights is therefore an important element in ensuring a safe and equitable future for all communities in Africa and elsewhere.

The situation is especially acute when their speakers are among the most marginalized groups in society, as language endangerment is frequently driven by exclusion in other areas. African states therefore need to support language revitalization efforts not only through education, but also through measures to address issues such as land evictions, discrimination and lack of access to development. This briefing therefore calls on governments, with the support of other stakeholders, to revise their laws and policies to ensure minority and indigenous language rights are respected.