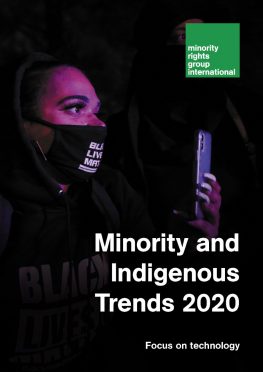 Technology increasingly permeates every aspect of our lives, from the use of big data to information and communication technologies (ICTs) to artificial intelligence (AI) and automation. These developments are often framed around issues such as efficiency, speed and innovation, but for minorities, indigenous peoples and other marginalized groups there are often very different forces at play – the replication of existing patterns of exclusion in new forms.

While a central aim of the Sustainable Development Goals (SDGs) was to reduce social inequalities within societies, the outbreak of the Covid-19 pandemic has highlighted how profound the gap remains for minorities and indigenous peoples in many countries. Though there is much hope and uncertainty around the possibilities of ‘track and trace’ mobile applications and other emerging technologies to resolve the crisis, without a firm commitment to social justice and universal access it is likely that many will be denied their benefits.

With minorities and indigenous peoples disproportionately represented among the world’s poor, it is not surprising that poverty is itself a major barrier to these groups accessing mobile phones, computers and other technologies. Besides the issue of affordability, there may be physical and geographic constraints, particularly for communities in rural or remote locations. In addition, other hurdles such aslimited information in minority or indigenous languages can compound lack of access. For marginalized groups within minority and indigenous communities, such as persons with disabilities, further significant issues arise — for instance, whether websites are accessible and compatible with assistive technologies.

The need for a more holistic approach to technology is therefore more urgent than ever, with an emphasis not only on affordable pricing and accessible delivery, but also culturally appropriate and inclusive design. Importantly, an inclusive approach to technology should translate not only to equitable access as users but also meaningful participation in their development. At present, however, minority and indigenous employment in sectors such as computing remains low. This poses a fundamental challenge to the creation of more diverse technologies downstream.