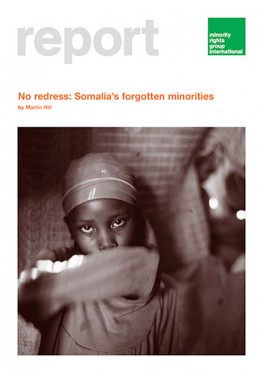 This report documents the neglected situation of Somalia’s minorities. It aims to raise awareness of the continuing severe violations of their human rights, so that they can move from exclusion and poverty towards a future of dignity, equal opportunities and non-discrimination alongside their fellow citizens.

The report examines the current situation in three regions of Somalia – Somaliland, Puntland and south-central Somalia – where differing political climates have left minorities in a state of desperation. Severe human rights violations against internally displaced minorities, particularly women, were reported to MRG’s researchers in Puntland. Accounts of hate speech, displacement and religious persecution, particularly of Christians, emerged in the violent south-central region of the country, where militant organization al-Shabaab controls much of the territory. Meanwhile, in the relatively peaceful self-declared Republic of Somaliland in north-western Somalia, minorities still face significant barriers in the political, educational and social spheres.

MRG emphasizes, among other recommendations, that the future new Constitution of Somalia must recognize the country’s minorities and guarantee their right to non-discrimination; that the participation of minorities in public life should be promoted; and that special measures should be implemented to protect and promote the rights of women from minority communities.

The report’s author, Martin Hill, is a specialist on Somali human rights. He has extensive experience of the Horn of Africa, having spent more than 30 years as a researcher for Amnesty International.