Pakistan: Minorities at Risk in the North-West 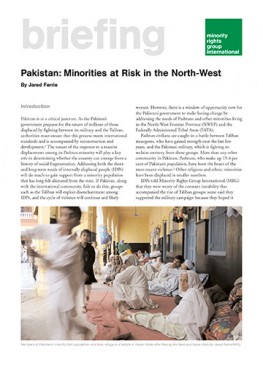 The Taliban insurgency in Pakistan’s North-West Frontier Province and the Federally Administered Tribal Areas, and the military offensive against the Taliban launched 6 May 2009, have created approximately 2.5 million internally-displaced persons (IDPs), of whom 235, 000 are currently in IDP camps. The UNHCR predicts a dramatic rise in these figures as IDPs return to a continuing unstable situation.

This report urges the Pakistani government to restore the rule of law, including transparency for reluctant international donors. Expenditure should centre on reconstruction and a long-term plan for regional stability, with a focus on safeguarding the rights of minorities, in order to minimise the reliance on IDP camps and the potential for the Taliban to exploit dissatisfaction.

The Pashtun minority are historically at risk of both association with the Taliban, and discrimination due to this association. The Taliban have targeted and suppressed women, and both ethnic and religious minorities who are also subject to discrimination in Pakistani society as a whole. If the government can address the humanitarian disaster swiftly with lasting solutions focused on development, education and human rights, they have an opportunity to engender national and regional stability by filling the vacuum exploited by the Taliban.