Still Far From Freedom: The Struggle of Mauritania’s Haratine Women 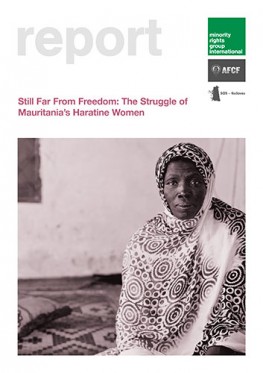 Mauritania is consistently ranked as the worst place in the world for slavery, with tens of thousands still trapped in total servitude across the country. This practice, despite officially being criminalized, continues to be sustained by the systematic marginalization of Mauritania’s large Haratine population. The situation is especially precarious for Haratine women, who are discriminated against on account of both their gender and ethnicity.

MRG’s new report, Still Far From Freedom: The Struggle of Mauritania’s Haratine Women, draws on extensive research and first-hand testimony from Haratine women. Besides highlighting the everyday reality of abuse and oppression experienced by those in servitude – ranging from exploitative labour, intimidation and confinement to rape, violence and the enforced separation of families – it also explores how formerly enslaved Haratines and their descendants still face widespread stigmatization. The deep discrimination experienced by Haratine women, even among their own community, is driven by the reluctance of authorities to take meaningful action to curb abuses.

Nevertheless, although these obstacles can be overwhelming, many Haratine women have demonstrated great courage and determination in their fight for equality and greater autonomy in their own lives. Despite the dangers and the deep resistance their activities attract, including from male members of their own community, Haratine women have played a leading role in advocating for their rights and legal redress for the abuses committed against them. Nevertheless, though the immediate abolition of slavery in Mauritania is a critical first step in reducing many of the worst rights abuses against Haratine women, a wider process of social and institutional reform will also be required before their rights and security can be ensured. These issues can only be addressed by a comprehensive and sustained process of social and institutional reform, with the involvement of the national government, Mauritanian civil society, law enforcement agencies and the international community.