The North Caucasus: Minorities at a Crossroads 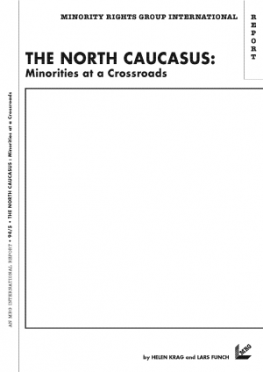 The North Caucasus region stretches along the high peaks of the Caucasian mountains from the shores of the Black Sea in the north west to the coast of the Caspian Sea in the south east. For centuries it has represented the literal and symbolic frontier between Europe and Asia. Today the region forms part of the Russian Federation, bordering Georgia and Azerbaijan. Following the breakup of the USSR, the North Caucasus has become a border region of renewed geopolitical interest.

This is one of Europe’s most ethnically diverse regions, and is home to over 40 distinct ethnic groups. As the peoples of the North Caucasus seek to redefine their identities in the current political arrangements, a multitude of latent and manifest conflicts have emerged.

In The North Caucasus: Minorities at a Crossroads, Dr Helen Krag and Lars Funch give an overview of the region’s history, the peoples of the North Caucasus, and the claims and conflicts – past and present. This report is one of the first publications to examine the North Caucasus and its peoples in depth, alerting the public and governments to a potentially volatile situation and suggesting ideas for possible action.