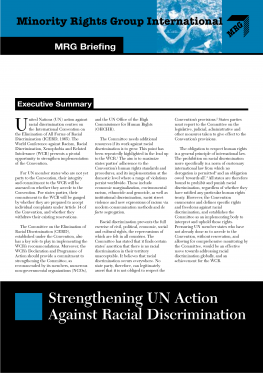 The Committee on the Elimination of Racial Discrimination (CERD), established under the Convention, also has a key role to play in implementing the WCR’s recommendations. Moreover, the WCR’s Declaration and Programme of Action should provide a commitment to strengthening the Committee, as recommended by its members, numerous non-governmental organizations (NGOs), and the UN Office of the High Commissioner for Human Rights (OHCHR).

The Committee needs additional resources if its work against racial discrimination is to grow. This point has been repeatedly highlighted in the lead up to the WCR. The aim is to maximize states parties’ adherence to the Convention’s human rights standards and procedures, and its implementation at the domestic level where a range of violations persist worldwide. These include economic marginalization, environmental racism, ethnocide and genocide, as well as institutional discrimination, racist street violence and new expressions of racism via modern communication methods and de facto segregation.

Racial discrimination prevents the full exercise of civil, political, economic, social and cultural rights, the repercussions of which are felt in all countries. The Committee has stated that it finds certain states’ assertion that there is no racial discrimination in their territory unacceptable. It believes that racial discrimination occurs everywhere. No state party, therefore, can legitimately assert that it is not obliged to respect the Convention’s provisions. States parties must report to the Committee on the legislative, judicial, administrative and other measures taken to give effect to the Convention’s provisions.

The obligation to respect human rights is a general principle of international law. The prohibition on racial discrimination more specifically is a norm of customary international law from which no derogation is permitted and an obligation owed ‘towards all’. All states are therefore bound to prohibit and punish racial discrimination, regardless of whether they have ratified any particular human rights treaty. However, the Convention enumerates and defines specific rights and freedoms against racial discrimination, and establishes the Committee as an implementing body to interpret and uphold those rights. Pressuring UN member states who have not already done so to accede to the Convention, without reservation, and allowing for comprehensive monitoring by the Committee, would be an effective move towards addressing racial discrimination globally, and an achievement for the WCR.