Twenty years on from Dayton – discrimination is ruining the lives of minorities in Bosnia and Herzegovina, new briefing 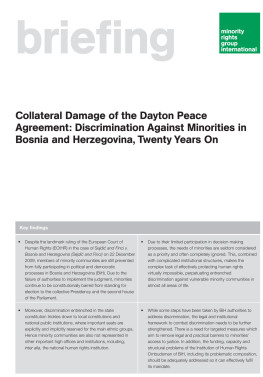 Twenty years after the signing of the Dayton Peace Agreement, discrimination entrenched in the Constitution of Bosnia and Herzegovina (BiH) continues to ruin the lives of minorities, says Minority Rights Group International (MRG) in a new report.

The human rights organization urges the country’s government to pass constitutional amendments to create the necessary conditions for all citizens to be equal.

The briefing, Collateral Damage of the Dayton Peace Agreement: Discrimination Against Minorities in Bosnia and Herzegovina, Twenty Years on, explains how the 1995 Dayton Peace Agreement, together with its precursor, the Washington Agreement, created a system which gave preference to certain communities over others and which has been in place ever since.

“The government continues to bury its head in the sand instead of addressing the glaring flaws in the constitution created by the Dayton Agreement. Rather than maintaining and perpetuating the privileged position of the main ethnic groups, the government should pass constitutional amendments to create the conditions for all citizens to be equal,” says Mark Lattimer, Executive Director of MRG.

Using evidence gathered through extensive research, the report spells out how the exclusion of minorities from the decision making processes contributes to their social and economic marginalization.

In the village of Vrbica in Livno, for example, a small Serb minority returnee community of mainly elderly people complain that the municipality allocate most of the public funds to neighbourhoods inhabited by the majority Croat community. The Serb minority lacks access to running water, proper roads, public lighting and a sewage system.

“Discrimination is deeply embedded in the Constitution. This does not only lead to the exclusion of minorities from political participation but can ruin lives and have the very gravest of consequences”, says Srdjan Dizdarevic, human rights expert in BiH.

One of the most severe cases cited in the report is that of Jasminka, a pregnant woman who died as a result of delayed health care. After arriving at the Zavidovići health centre with heavy bleeding and excessive pain, she was refused treatment unless she could pay. She was transported to a local hospital but with severe delay, and sadly died 10 days later. The report alleges that Jasminka may have been a victim of discrimination because of her Roma ethnicity, as pregnancy and urgent care are free of charge in BiH regardless of the insurance status of the person.

Under Bosnia’s current system, membership of the three-member Presidency and the upper house of the Parliament is restricted to the three “Constituent Peoples” (Bosniaks, Croats and Serbs).  Other communities – including minorities who have lived in BiH for centuries – are excluded from both.

Although a 2009 European Court of Human Rights ruling, in which MRG represented one of the plaintiffs, called for the resolution of the situation, the government of BiH failed to take necessary action. Preserving this unlawful political system has led to the worsening situation of minorities in many parts of the country.

For more information, an embargoed copy of the report or to arrange interviews, please contact: