Trump travel ban is ‘wrong in law and wrong in fact’, MRG says 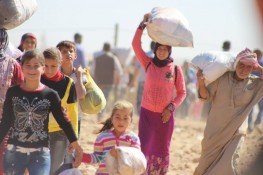 The US presidential executive order placing a blanket ban on immigration from seven Muslim-majority states and temporarily halting admission of all refugees was denounced as unlawful and dangerous by Minority Rights Group International (MRG), an organisation working to protect persecuted religious and other minorities in a number of the states in question.

US President Donald Trump announced on 27 January 2017 that his government is suspending its refugee programme for at least 120 days, cutting the number of refugees it is receiving and halting its Syrian refugee resettlement programme indefinitely. He has also passed a travel ban for nationals of seven Muslim-majority states.

‘The executive order is wrong in law and wrong in fact,’ emphasises Mark Lattimer, MRG’s Executive Director. The order violates US nationality and immigration law; it also breaches the US’s obligations under international law not to discriminate against refugees on grounds of religion. Over the weekend a New York federal judge halted the removal under the order of those who were legally authorised to enter the US, including from Iraq.

The sudden and drastic curtailment of the US’s refugee programme means that  refugees already accepted for resettlement by the US now face an uncertain and often extremely threatening future. The US President’s reported comments about persecuted Christians was also inaccurate.

‘In Syria and Iraq, all communities are at risk, including Sunni Muslims who currently face gross violations of human rights and international humanitarian law,’ says Lattimer. ‘But by linking his actions to the cause of persecuted Christians, the US President is at risk of placing Christian communities in the Middle East in greater danger.’

MRG has worked for over a decade monitoring the persecution of Christians and other religious minorities in the Middle East and North Africa. The organisation has also been monitoring Islamophobia in Europe, North America and Asia. After the US presidential election in November, MRG reported that Trump’s campaign had already led to a drastic increase in anti-Muslim hate crimes in the US.

For further information or to arrange interviews with Mark Lattimer