Minority Rights Group > News > News and blogs > The Deportation of Iraqi Citizens from the US: a Legal and Moral Question

The Deportation of Iraqi Citizens from the US: a Legal and Moral Question 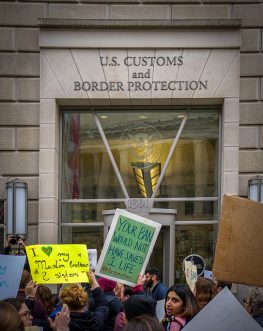 MRG legal intern Lorenza Cocco, who is currently working on the Ceasefire Program focusing on the protection of human rights in Iraq, comments on President Trump’s recent decision to deport thousands of Iraqi citizens back to Iraq, exposing them to torture and danger.

Usama Jamil Hamama, also known as “Sam”, has lived in the US since he was a little boy. He is now 54 years old, manages a supermarket and has four US-born children. On June 11, 2017 the US immigration authorities came to his house without warning and arrested him in front of his family. He wasn’t accused of any crime. He was transferred to a county jail and told to wait for his imminent removal to Iraq.

Sam forgot his native language. He doesn’t speak Arabic anymore and has no family back in Iraq. He is Christian, with a cross tattooed on his wrist. His wife is extremely worried and fears for his life if the government manages to deport him. Where would he go? What would he do? Who would help him?

Like Sam, another 230 Iraqi citizens  were detained by Immigration and Customs Enforcement (ICE) and another 1,444 were issued final deportation orders. The Chaldean Christian minority is the most targeted, although Kurds and Muslims have been affected too. Chaldean Christians are indigenous Iraqis linked to the Roman Catholic Church who began migrating to the US in the 1920s. It is widely recognized that they are persecuted in Iraq; human rights advocates compared their deportation to a “death sentence.” Nevertheless they are now facing imminent removal without even questioning the serious danger they would face.

But let’s back up a little. This has to do (again) with President Trump’s much contested executive order to ban citizens of seven Muslim-majority countries. Despite the national protests, the outrage of the international community, and the opposition of federal judges who struck down his first travel ban, Trump has been more adamant than ever in pushing forward his controversial immigration policy. Last March, he came up with a revised travel ban, this time excluding Iraq from the list of banned countries. In return, the Iraqi government agreed to accept back all Iraqi citizens living in the US with a criminal record.

The US government stated that those arrested are all Iraqi immigrants guilty of serious crimes, ranging from homicide to weapons and drug charges. But most had served their time in prison for their offences many years ago. “It is a shame that, for one mistake, that he paid for legally, now he has to pay with his own life,” Sam’s wife argued. In addition, although ICE claimed that all of those arrested had already received removal orders, it is acknowledged that the US government had previously released them under orders of supervision that required regular check-ins with immigration authorities.

The nature of this policy doesn’t only raise moral considerations, but has also serious legal implications. In fact, sending these people back to Iraq not only jeopardizes their personal safety, exposing them to retaliation and torture for their religious beliefs, but it also represents a gross violation of US law and international law.

Supported by expert evidence from MRG, the American Civil Liberties Union (ACLU) filed a class action petition to prevent the unlawful deportation of Iraqi citizens. The petition argued that the US government is violating a fundamental obligation under international and national law in removing a noncitizen to a country where his or her life and freedom would be threatened on the grounds of race, religious nationality, membership of a particular social group or political opinion. The UN Convention Against Torture also prohibits the removal of individuals if it is highly likely that the individual would be tortured. In addition, Iraqis subject to deportation have the right to counsel and to challenge their removal in a fair proceeding before leaving the country. ACLU stressed that ICE had transferred the detainees from their homes in Michigan to a facility in Ohio, making it extremely complicated for them to access legal counsel.

The ACLU petition scored an important legal victory last July. A federal judge in Michigan halted the deportation of all the petitioners, expanding an earlier stay which applied only to the 114 detainees in the Detroit area. It is not clear whether the US government will appeal the decision. One thing for sure is that the revised travel ban has been subject to a new and complex internal legal battle and the outcome of it all is still unclear. At least the federal judge’s decision will grant the affected Iraqis the time to have access to legal assistance and to lawfully challenge their removal in federal courts.