The Democratic Republic of Nepal is a landlocked country surrounded by India on three sides (south, east and west) and Tibet, a region of China, to the north. More than 80 per cent of the population of Nepal professes Hindu religion, leading it to be recognised as the only official Hindu State of the world. For a country with the size of Nepal, the landscape offered is one remarkable diversity – ranging from a humid, muggy terrain to the high Himalayan range in the North. Nepal also has eight of world’s ten highest mountains, which includes Mount Everest. Nepal’s capital is Kathmandu, which is also its largest city.

Nepal has a long and fascinating history. The spread of Buddhism, its displacement by Hinduism and the induction of the caste system are significant historical occurrences with major contemporary dimensions. The modern history of Nepal may be thought of as starting with the Gurkha ruler Pirthivinarayan Shah’s conquest of Kathmandu valley in 1769, bringing under one rule the kingdoms of Patan, Bhkatpur and Kathmandu. The expansionist policies of Pirthivinarayan Shah and his successors resulted in the borders of their empire stretching as far as the River Sutlej to the west, with significant inroads in the Gangetic plains in the south. This expansion, however, brought the Gurkhas – inhabitants of the small Gurkha hill state, now part of Nepal – into conflict with China, and their subsequent defeat in 1816 at the hands of the British resulted in a peace treaty which, with subsequent minor adjustments, represents the present borders of Nepal. 1816 to 1846 was a period of political strife and intrigue, which culminated in the seizure of power by Jung Bahadur, who adopted the prestigious title of Rana and proclaimed himself Prime Minster for life. The office of Rana was made hereditary, with Rana descendants ruling Nepal until the end of the Second World War, although the Shah dynasty continued subsequently to occupy the throne.

The British withdrawal from India in 1947 was of serious consequence to the Ranas, who were then faced with a number of movements for political reform. King Tribhuvan briefly fled into exile in India, lending his support to the anti-Rana movement. The Ranas finally yielded to India’s pressure, and King Tribhuvan returned in 1951 with full powers restored to the monarchy. He established a government comprising Ranas and members of the National Congress Party (NCP), but this coalition was short-lived. Tribhuvan’s son and successor, Mahendra, who succeeded in 1955, decided that partyless elections and the panchayat (an advisory body appointed by the King) system were the most suitable system of government. The King selected the cabinet and Prime Minister, and appointed a large segment of the National Assembly, thus retaining political power.

A wave of political unrest and dissatisfaction with the government culminated in the Jana Andolan or Peoples Movement of 1990. King Birendra, who had reigned since 1972, conceded to the demands of democracy and accountability by dissolving the cabinet, lifting the ban on political parties and inviting opposition parties to form an interim government. By November 1990 a new constitution guaranteeing free speech, human rights and a constitutional monarchy was in place. Under its provisions the King remained commander-in-chief of the armed forces but could not make executive decisions without consulting the Prime Minister and cabinet. The old panchayat was replaced by a Parliament consisting of a directly elected House of Representatives and a smaller National Assembly. Since 1991 control of the government has alternated between the NCP and the United Communist Party of Nepal.

Nepal has traditionally been dominated by Brahmins and Chhettris, and the language and culture projected from the centre have been those of the Hindu populations of the hill and Kathmandu valley regions. The hill peoples who speak Tibeto-Burman languages (Rai, Limbu, Tamang, Magar, Gurung and others) have been under-represented in government, while the Terai population in the south, mainly Hindus and Hindi-speakers, have also felt themselves to be poorly served in terms of the distribution of public resources.

A trend likely to be nurtured by a democratic environment is the development of stronger group consciousness and stronger demands for a share of political power and recognition of group status, whether based on ethnicity, language or both.

Other prime areas of concern for minorities in Nepal have been landlessness, deforestation and bonded labour. Studies indicate that people of the Limbu, Chepang and Tharu linguistic communities have lost their land rights through a combination of abrupt changes in land tenure laws, the influx of Brahmin and Chhettri settlers and the communities’ lack of literacy and awareness of legal procedures. In this process, land once cultivated as common land comes gradually into the hands of immigrant groups that are able to register land they initially cultivated as tenants. Land reform legislation appears to have hurt several linguistic minorities, as has the mismanagement of compulsory savings schemes, and their frequent lack of knowledge of legal and bureaucratic workings has made them vulnerable.

Further, the Private Forest Nationalization Act 1957 and subsequent legislation led the way for administration of the forests to be taken over by the state. This resulted in grave injustices, largely arising from corruption among Brahmin forest administrators. Linguistic minorities of Nepal have also to contend with debt bondage and serfdom.

Nepal’s history of autocracy, political instability and absence of democratic institutions, when aligned with its underdeveloped infrastructure, has led to many violations of individual and collective human rights. Every section of the community has been affected, but Nepal’s linguistic minorities have been particularly vulnerable and open to abuse.

Over the past decade Nepal has witnessed considerable political upheavals and a civil war which has claimed more than 12,000 lives. After the dismissal of the elected government in 2002, the king has appointed three interim governments. Sher Bahadur Deuba, a former prime minister, was reinstated on 2 June 2004. However due to the ongoing insurgency led by the Maoists, and the inability to form a political consensus, it became impossible to establish normal parliamentary processes. Prime Minister Deuba was forced to resign in February 2005 with the King Gyanendra seizing absolute control of the government, ostensibly to combat the Maoist rebellion. Sher Bahadur Deube was convicted over charges of corruption by a Royal Commission was imprisoned for two years. The charges brought against the former prime minister and his conviction at the hands of a Commission appointed by the king were heavily criticized as a major setback to democracy and rule of law, and ultimately acted as a catalyst for mass demonstrations in the Capital Khatmandu in April 2006. After assuming absolute control of the government the King suppressed all forms of political dissent, imprisoned human rights activists and allowed the Royal Nepalese Army, a free hand in defeating the Maoists. The-over a decade long-violent Maoist insurgency, in turn, led to an increase in the number of political violence and disappearances in Nepal. According to the UN High Commissioner for Human Rights, at present Nepal had the highest number of disappearances anywhere in the world. The Maoist insurgency has a hugely negative impact at all levels, including schooling and higher education.

The practice of Caste system within Nepal has resulted in considerable discrimination and exclusion of the Dalits and the Janajists. Amidst the civil and political unrest, women (from all communities) have suffered from discrimination, victimization and degradation. In addition, Nepal continues to suffer from long-standing refugee problems. There has been no durable solution to, or improvement in the plight of, over 100,000 Bhutanese refugees in Nepal. The refugees who constitute one-sixth of Bhutan’s present population have been housed in seven refugee camps in southern Nepal for the last 16 years. According to official estimates, there are about 106,000 refugees in these camps though an increase in numbers cannot be ruled out over the years. Over 98 per cent of them are ethnically Nepali-speaking Hindus who are called ‘Lhotshampas’, (literally ‘those living in the south’) – the rest 2 per cent being Buddhists. They were literally driven out of their homes in Bhutan in 1990-1 through a combination of denial of citizenship and restrictive land laws possibly because they were perceived as being a threat to the ‘ethnically superior’ Ngalops who, although a minority, have traditionally ruled Bhutan. Denied their right to citizenship and systematically deprived of their lands and property, these refugees have had to subsist in poverty and squalor in the camps, in living spaces measuring 14X8 ft per family and strictly allocated basic food rations. Though there have been 15 rounds of talks between Nepal and Bhutan, nothing has changed for the refugees. While Nepal refuses to grant citizenship to the refugees and claims it is an issue between the Bhutanese government and the refugees, Bhutan claims that it is an issue between Bhutan and Nepal. India has stayed out of the problem stating that it is a bilateral matter between Nepal and Bhutan. The United States has recently got involved by agreeing to take in 60,000 refugees by giving them full citizenship rights and status. Canada and Australia have also followed suit by making similar but smaller gestures. As a consequence of the intransigence of both Nepal and Bhutan in resolving the refugee crises, during 2005-2006 the UN High Commissioner for Refugees threatened to withdraw support for the refugees-this would leave these refugees vulnerable to further abuse and continuing statelessness.

M. Hutt, (ed.), Nepal in the Nineties: Versions of the Past, Visions of the Future (London, Oxford University Press) 1994.

A Journey to Imja Lake: Climate Change in the land of the Sherpa 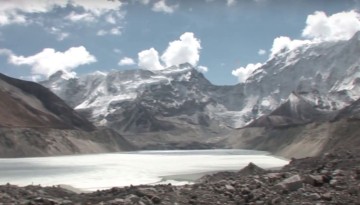 A Journey to Imja Lake: Climate change in the land of the Sherpa + LEARN MORE
Press Releases