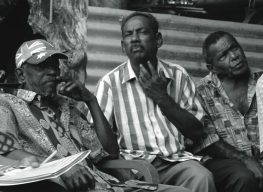 This evaluation covers a project focused on ethnic relations and discrimination against ethnic minority groups in Fiji. The project took place from 2012 to 2013 when Fiji was going through a critical period of constitutional reform. It was also a time when certain political restrictions were still in place and partner organization, Citizen Constitutional Forum (CCF), was going through some challenging relationships with the government and judiciary. The project was funded by the European Union.

The broad aim of the project was to contribute to the improvement of inter-ethnic relations in Fiji and to reduce the discrimination experienced by specific ethnic groups in a country marked by a prolonged history of inter-ethnic conflicts and violence. The project had two major components: (1) research on ethnic relations in Fiji which led to a report titled Fiji: the challenges and opportunities of diversity, and (2) roundtable consultations, both locally in Suva, Fiji with civil society organizations, aid agencies and representatives of foreign embassies, and in Canberra, Australia, and London, England. It was hoped that the research and outcomes of the roundtables would contribute to the constitutional consultation process.

The evaluator found that, ‘The project was relevant given Fiji’s complex history of ethnic turbulence and the need to address the issues of ethnic minority groups, many of whom have been politically marginalized and voiceless as well as socio-economically disadvantaged.’ He also stated that, ‘All the participants interviewed felt that the project was very relevant to their organizations as well as personal work and interests in ethnic relations in Fiji,’ but cautioned that, “the aims of the project could have been more sharply focused.’

‘The consultations proved to be very successful, judging by the reports of the proceedings, evaluation by the participants and discussions with participants. Responses from the aid agencies and other international participants were very positive.’

In fact, organizations such as the Fiji National Youth Council and Interfaith Fiji, which do not have specific ethnic policies, said that the consultation was ‘eye-opening because it alerted them to the plight of disadvantaged minority groups.’ The evaluator noted that, ‘They are now aware of the need to be more inclusive of minority rights and situations in their programmes.’ Similarly, the UNDP representative stated that, ‘Its association with CCF and its involvement in the minority programme has provided them with a good base for refining some of their own approaches to the Fiji situation.’

The evaluator raised a number of issues relating to project design, partnerships, lack of government involvement, presentation of research and sustainability. However the evaluator finds that, ‘Despite the problems of communication, unequal division of labour and resources, unfavourable political climate in Fiji and the distance between Suva and London, the level of efficiency was commendable.’

The evaluator concludes that, despite some shortcomings, ‘generally the project was well executed and the responses from the participants were encouraging.’