Minority Rights Group > Publications > Between the millstones: Iraq’s minorities since the fall of Mosul

Between the millstones: Iraq’s minorities since the fall of Mosul 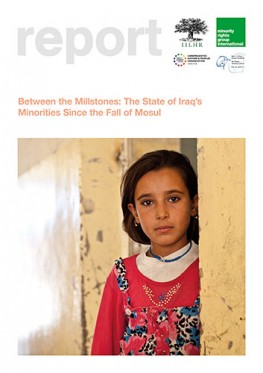 This report provides critical information on the legal basis for war crimes prosecutions and follows a hearing on religious minorities in the European Parliament.

‘Between the Millstones: Iraq’s Minorities Since the Fall of Mosul’ is a joint report of Institute of International Law and Human Rights (IILHR), Minority Rights Group International (MRG), No Peace Without Justice (NPWJ) and the Unrepresented Nations and Peoples Organization (UNPO) focusing on the Christians, Kaka’i, Shabak, Turkmen and Yezidi – who have been most affected by the conflict.

‘While military action against ISIS dominates the headlines, to date there has been no serious effort to bring the perpetrators of crimes against minorities to justice,’ says William Spencer, Director of IILHR. ‘Minorities were first caught by wholesale discrimination and violence well before the arrival of ISIS. Now they face a new threat to their existence from ISIS attacks.’

The report combines eye-witness accounts by members of minorities with legal analysis.