Minority Rights Group > Publications > Roma in the Republic of Serbia: The Challenges of Discrimination

Roma in the Republic of Serbia: The Challenges of Discrimination 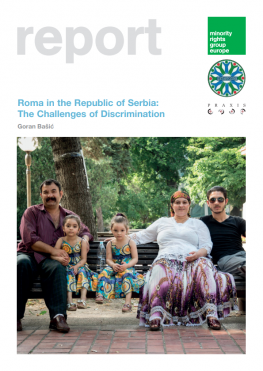 In 2002, the Roma population in the Republic of Serbia was granted the status of a national minority, on the basis of which they enjoy the rights to protection of their national, cultural and linguistic identity. Since most Roma have long been exposed to the consequences of structural poverty and discrimination, the government has adopted the Strategy for Social Inclusion of Roma until 2025. The goal of the Strategy is to implement policies aimed at reducing poverty and eliminating discrimination against Roma in five strategic areas (education, employment, housing, social protection and health care) at the national and local level.

The national statistical office and professional organizations do not collect ethnically disaggregated data on the situation and exercise of the rights of Roma, which makes it difficult to evaluate the success of implemented measures, plan new measures and manage the Strategy. The Action Plan for the implementation of the Strategy expired in 2018, and a new one has not been adopted. According to the 2013 and 2019 reports of the Protector of Citizens and the findings of the research Social Relations between Ethnic Communities in Serbia (Institute of Social Sciences, 2020), Roma are not satisfied with the progress made. According to this most recent research, living conditions improved for only 14.2 per cent of respondents of Roma ethnicity, while for 25.3 per cent improvement was minimal and 54.8 per cent did not notice any improvement at all. Reports and opinions of the European Commission and expert bodies of the Council of Europe (the Advisory Committee on the Framework Convention for the Protection of National Minorities, ACFCNM, and the European Commission against Racism and Intolerance, ECRI) have also highlighted the problems related to the implementation of strategic measures.

Discrimination against Roma is a problem addressed by institutions and public policies, but the persistence of discriminatory treatment and behaviour towards them indicates that it is necessary to strengthen existing resources and build new capacities through a comprehensive anti-discrimination policy. Roma most often face discrimination in their daily contacts with fellow citizens, at work and while performing their usual daily tasks and activities. Employment, exercising the right to work, social protection and health care and education are all areas where they are frequently exposed to discrimination. Spatial segregation and segregation in education, as well as hate speech, are forms of discrimination that, despite the established institutional protection, make exercising the rights of Roma more difficult. According to empirical data from the research mentioned above, members of the Roma national minority in Serbia most often face discrimination on the basis of their ethnicity. Sixty-six (66) per cent of Roma respondents have experienced such discrimination more than 10 times in their life, and another 15.1 per cent have experienced discrimination up to 10 times. Discrimination is rarely reported by Roma because they do not trust the institutions and the justice system. According to the findings of the research, 71 per cent of Roma citizens did not report discrimination, while out of the 23 per cent of incidents of discriminatory treatment and behaviour that were actually reported, just 4 per cent resulted in the authorities eliminating the consequences of discrimination.

Roma are increasingly well informed about forms of discrimination, as well as relevant institutions and protection mechanisms, and possible ways of reporting, but they often identify discrimination with other actions and practices similar to discrimination.

The Commissioner for Protection of Equality, established in 2010, deals with the problem of discrimination against Roma. However, according to Roma citizens, experts and representatives of civil society organizations (CSOs), this commitment should be stronger, better planned and deliver more substantial and effective results that change the awareness of the public and institutions about the harmfulness of discrimination. These remarks are justified, but it should be noted that the Commissioner does not have the authority to initiate procedures without receiving a complaint in accordance with the Law, that the Commissioner’s opinions and recommendations are not binding, and that it does not have the possibility to monitor their implementation.

There are also other obstacles that hinder access to justice and thwart anti-discrimination efforts. Some of these obstacles stem from strong public stereotypes about Roma. Other obstacles are related to the problems of establishing and strengthening the rule of law, the crisis of parliamentarism and the pressures faced by the judiciary, as well as the inconsistent implementation of policies of multiculturalism and inclusion. There are also obstacles to combating discrimination against Roma stemming from the poor public culture of human rights and the lack of training of public administration and local self-government employees on anti-discrimination policies. Finally, among the obstacles to the establishment of an effective anti-discrimination policy are a number of problems that hamper the functioning of free legal aid and make it difficult to support local self-government in terms of the exercise and protection of human rights.

In order to improve the current situation, to establish an efficient and effective institutional system to combat discrimination, it is necessary to have a synergy of ideas, policies, measures and activities created and implemented by international organizations, the state, local self-government, civil society and the media. In order to establish an efficient system of social inclusion and encourage efficient and sustainable anti-discrimination policies, in which each of the afore-mentioned stakeholders acts responsibly in accordance with its role, it is necessary to undertake an urgent revision of the Strategy for Social Inclusion of Roma, based on evidence (in particular, disaggregated data), to make amendments to the Law on Prohibition of Discrimination to introduce new powers of the Commissioner for Protection of Equality (including power to initiate procedures for establishing discrimination on its own, to directly monitor implementation of recommendations and opinions it has issued) and to create conditions for unimpeded access to justice for Roma citizens.