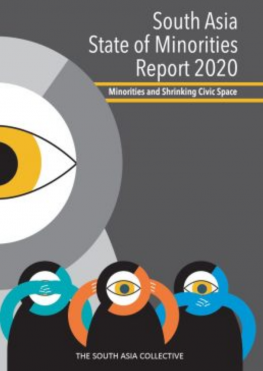 Across South Asia, civil society is being increasingly constrained. It is either too nascent, due to late democratic development, or where it has had a little history of growth and nurturing, is facing strong challenges. Anti-democratic authoritarian tendencies and greater securitisation of laws and practices appears to be the main drivers of this narrowing trend, with the mid-2010s appearing to be the period of convergence for this constriction in many of the countries. Democracy champions, human rights defenders (HRDs), and activists have been in the crosshairs of authorities everywhere for challenging state actions and speaking out. A great deal of the narrowing of space for civil society concerns minorities, which is also due to the hardening of majoritarianism across the region.

This report focuses on the status of civic space in South Asia, specifically for minorities. A comprehensive and inclusive definition of civic space includes social movements, national and international non-governmental organisations (NGOs), civil society organisations (CSOs), the media, academics, and activists, among others. A functional civic space depends on the rights i) to associate, ii) assemble peacefully, and iii) freely express views and opinions. Hence, each chapter of the report seeks to explore the status of these three ‘basic freedoms’ in several ways.

The chapters relied on desk research with a review of published materials on civic space for minorities in the respective countries. The chapters also include assessments of laws and policies to regulate civic space as well as the bills proposed over the years to capture the general mood of the government over time vis-à-vis civic space and civil society. Some primary data was collected through an online expert survey for Afghanistan, India, Pakistan and Nepal to assess the public perception on civic space there. While a similar survey was undertaken in all the countries, the pandemic as well as other factors led to a very low number of respondents, making the analysis moot. The pandemic also resulted in the research for individual chapters being mostly confined to materials available online.

This report was produced under a joint collaboration between Minority Rights Group and the South Asia Collective, under the project ‘Supporting Religious Pluralism and Respect for Freedom of Religions or Beliefs across South Asia’ More information on this project can be found here.