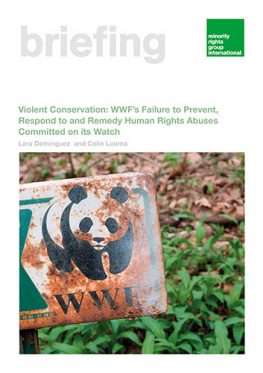 This briefing provides an alternative executive summary of the Report of the Independent Panel of Experts (the Panel) of the Independent Review of allegations raised in the media regarding human rights violations in the context of the World Wide Fund For Nature (WWF)’s conservation work (the Report).

The Panel’s executive summary and accompanying press releases from both the Panel and WWF have obscured the scope and nature of the Panel’s findings with respect to WWF’s failure to uphold its human rights commitments. Under the heading ‘What were the findings of the independent review’, WWF has claimed that:

The Independent Review found no evidence that WWF staff directed, participated in or encouraged in [sic] human rights abuse of any kind. The Panel recognized WWF was one of the first conservation organizations to embrace human rights principles; that WWF’s commitments often set higher standards than the laws and practices of the states in which we work; and that WWF took many steps to support communities. The Panel also identified shortcomings and called for more rigour in how we implement our policies, listen and respond to communities and advocate for governments to protect human rights.

To counter this mischaracterization of the Report, the alternative executive summary contained in this briefing elucidates and clarifies the Report’s salient findings based on a thorough review of what the Panel actually determined through the course of its independent investigation, namely that:

Accordingly, the following alternative executive summary provides a counter-narrative to some of the immediate reactions to the Report, which erroneously interpreted the Panel as clearing WWF of wrongdoing. This is based strictly on the findings of the Panel, as detailed in the 160-page Report. This briefing ends with the authors’ analysis of the Panel’s findings and their implications for WWF’s conservation work (as well as that of other large conservation NGOs working in protected areas and the donors that fund them). In so doing, it points to some of the deeper structural reforms necessary to address the flaws in the coercive conservation model that lies at the root of the allegations subject to the Panel’s investigation.