Six months since being declared a pandemic, evidence mounts of how Covid-19 hits minorities and indigenous peoples hardest – New briefing 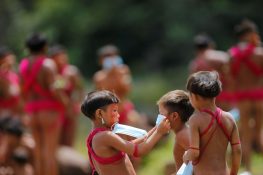 Read this press release in French and in Arabic.

Six months after the World Health Organization declared Covid-19 a pandemic, its far-reaching social, economic, and political consequences are still unfolding. Although everyone is at risk of the virus, minorities and indigenous peoples are among the worst affected, says a new briefing by Minority Rights Group International (MRG).

Inequality and the impact of Covid-19: How discrimination is shaping the experiences of minorities and indigenous peoples during the pandemic, released today, outlines the grave effects of the Covid-19 pandemic on the world’s most vulnerable populations.

‘From gender inequalities to ethnic, racial, and religious discrimination, the pandemic has been exacerbating existing inequalities,’ emphasises Rasha Al Saba, the author of the briefing. ‘We are witnessing this in domains ranging from the risk of contracting the virus and of dying from it to a reduced access to healthcare, education, employment, food and security’.

In the UK, Blacks, Asians and other ethnic and religious minority communities, including Muslims, Hindus and Sikhs, appear to be more at risk of contracting the virus, being generally poorer, more likely to be living in overcrowded conditions and facing  greater difficulties in accessing to healthcare. The same goes for African Americans in the US. By April 2020, US counties with black majorities had three times the rate of Covid-19 infections and almost six times the proportion of deaths compared with counties where white residents are the majority. In Brazil, the effect of the virus on indigenous peoples has been catastrophic, with official statistics suggesting that the mortality rate among those who have contracted the virus is almost double that of the national average.

On top of the immediate health risks, minorities and indigenous peoples can face acute difficulties in accessing the very basic supplies that are needed to combat the virus.

‘Tragically, those who are worst affected by the pandemic are also those who are least likely to get the help they need’, explains Joshua Castellino, MRG’s Executive Director. ‘This ranges from public health information to basic supplies and access to medical care. Meanwhile, unscrupulous politicians in many countries are scapegoating the most vulnerable’.

Batwa communities in Rwanda report that they have not been able to obtain the necessary face masks, soap, and disinfectant. For populations affected by armed conflict, the pandemic has overstretched already fragmented or under-resourced healthcare systems, such as in Syria, Lebanon or the Rohingya refugee camps in Bangladesh.

‘The pandemic has been weaponised by incompetent governance, often with tenuous political hold on their societies. While this resulted in large scale deaths across societies, it was often accompanied by a concerted attempt to scapegoat minorities in a desperate bid to curry favour and legitimacy in angry, grieving societies,’ adds Castellino.

Several instances of local and national governments using the pandemic as an excuse to further their own agenda have been reported over the past weeks and months. The wide-ranging lockdowns that have been implemented in numerous countries worldwide in an effort to curb the dissemination of the virus have also had profoundly discriminatory impacts on the most marginalized groups in their societies, such as migrants, refugees and asylum seekers. In Lebanon, for example, migrant workers have been denied accessing the supposedly free for all Covid-19 medical services, due to lack of documents. In China, many Africans were forced to be tested and quarantined inhumanely, while in several European countries, Roma settlements have been heavily policed and subjected to mandatory quarantines.