Tunisia to establish a Commission against racial discrimination 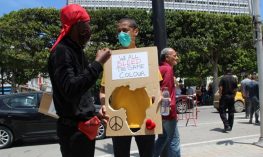 On 7 April 2021, the Tunisian government passed the decree no. 2021-203 for the creation of the National Commission for the Fight against Racial Discrimination. Although the establishment of this National Commission was foreseen by chapter V of law no. 2018-50 concerning the elimination of all forms of racial discrimination, the Commission has yet to see the light of day, almost three years after passing this historic law. This document provides hope that it will be finally established soon.

The decree describes all modalities, including the responsibilities, composition, structuring and functions of the Commission. It foresees the presence of 25 active members, five of whom are civil society representatives elected on the basis of their track record of work in the fight against racial discrimination. The other members are the General Director of Human Rights within the Ministry of Human Rights (a currently vacant post, since the last major cabinet reshuffle that took place in January 2021), a Member of Parliament responsible for rights, freedoms and foreign affairs, a single representative for 15 ministries (such as justice, interior, education, sports, health, etc.), a member of the Instance for Human Rights (yet to be elected), a representative from the media sector and a representative from the National Institute of Statistics. The Commission can also invite any other relevant person to attend the meetings with a consultative (not voting) status.

The creation of the Commission is a positive step for which Minority Rights Group has long been advocating alongside Tunisian civil society organisations (CSOs), such as our partner Mnemty, and other actors active in the fight against racial discrimination in Tunisia, including the OHCHR country office.

Indeed, between November 2019 and July 2020, MRG and OHCHR Tunisia organised five training events for Tunisian lawyers on national law as well as regional and international standards against racial discrimination, with a total of 160 lawyers trained. Out of those, 60 joined a network of lawyers to support victims of all forms of discrimination, as part of our project implemented in partnership with Damj, ‘Points Anti-Discrimination Tunisie’. Our lawyers provided dozens of consultations, and 12 lawsuits were filed based on law no. 50 between January 2020 and March 2021. One of those led to the famous case that lawyer Hanen Ben Hassena won in October 2020 before the Court of First Instance of Medenine, where the judge allowed the removal of a reference to slavery from the patronym of an 81-year-old man from Djerba.

Among the responsibilities of the National Commission, there is the collection and analysis of data, rights violations and recommendations for solutions, something that our anti-discrimination network has done in 2019 and 2020, however stressing that an official and centralised effort from the government would have been required. Moreover, the official percentage of black Tunisians is still unknown, since the government only disaggregates data by gender and age; unofficial data from CSOs have reported in the past years that black Tunisians may amount to 10-15 per cent of the population. There is also a lack of reliable figures about sub-Saharan migrants on the Tunisian territory, who are often those paying the worst consequences of racial discrimination due to a situation of vulnerability and the bureaucratic barriers they face in getting residency permits; many are in irregular situation and end up being victims of economic and sexual exploitation that may amount to human trafficking.

The Commission will be responsible for suggesting the strategies and public policies to deal with all those issues and others related to structural racial discrimination from which Tunisia, like every country in the world, is not exempt. It will coordinate with the different sectors such as media and education, to name just a few, to spread a culture of human rights. In doing so, it will cooperate with civil society and all relevant national bodies. It will meet at least once every three months and produce a yearly report to be submitted to the President of the Republic, the Head of the Government and the President of the Parliament.