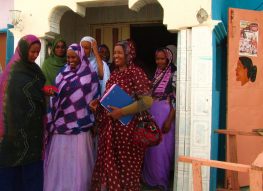 The Haratine are an ethnic minority found in Mauritania, whose population is essentially composed of Moors (or Beidanes) who live in the Northern part of the country.  The term Haratine refers to slaves (freed slaves) and persons of slave descent.  Haratine are descendants of black ethnic groups that were captured by the majority white Maures or Berber- Arabs and have been discriminated against and have lived under slavery for years. Slavery, underpinned by deep-seated discrimination as well as marginalisation, remains a common practice in Mauritania regardless of its prohibition under the law.  Mauritanian adults and children continue to be sold and bought as slaves, children are enslaved by the masters of their parents and women do not choose who they marry most of the times. Some are also disposed of their ancestral property by their masters or masters of their parents upon their parents’ deaths.

Since 2011, MRG has been supporting domestic cases challenging slavery and discrimination against Haratine women and children in Mauritania, we are currently involved in ten pending cases.  We work closely with local partners and a Haratine lawyer, providing input and guidance in the litigation.  In November 2011, we saw a breakthrough in one of our cases resulting in the handing down of the first successful prosecution against a slave master since the passing of the 2007 Anti-Slavery Law.  The master of two slave children was fined and sentenced to two years’ imprisonment and ordered to pay compensation to the children; however their lawyer appealed on the grounds that the judgment was too lenient.  The accused was released on bail after four months’ detention.

Given the lack of progress in the Mauritania criminal system, MRG and SOS-Esclaves have taken this case (on behalf of two slavery victims) to the African Committee on Experts on the Rights and Welfare of the Child. Submissions addressing both admissibility and merits were lodged in December 2015. The submission claimed that Mauritania has failed adequately or effectively to enforce the 2007 law criminalising slavery and that those convicted under the law did not receive sentences commensurate to the seriousness of their actions. Further, it was submitted that Mauritania had failed to ensure the appeal against the unduly lenient sentences and the level of compensation awarded was heard promptly and the absconded slave master is located and brought to justice. It was then submitted that these failures amount to violations by Mauritania of Articles 1 (obligation of State Parties), 3 (non-discrimination), 4 (best interests of the child), 5 (survival and development), 11 (education), 12 (leisure, recreation and cultural activities), 15 (protection from economic exploitation), 16 (protection against child abuse and torture), 21 (protection against harmful social and cultural practices) and 29 (prevention of sale, trafficking and abduction of children) of the African Charter on the Rights and Welfare of the Child. An admissibility decision was delivered in September 2016 in favour of the Complainants, and oral submissions on the merits were heard in October 2016.

Reluctance at the judicial and political levels has proved to be a stumbling block towards pursuing these cases. This is despite the local lawyer and partner regularly meeting with Ministers and other officials.  A joint shadow report addressing slavery and its impact was provided to the United Nations Committee on Economic, Social and Cultural Rights in September 2012. In September 2013, MRG submitted a shadow report to the Human Rights Committee in conjunction with Anti-Slavery International and SOS-Esclaves, in efforts to further increase awareness of the issues. In 2014, the UN Special Representative on Slavery visited Mauritania and was critical of the continued lack of implementation of the country’s anti-slavery laws.  The report of the working group on the universal periodic review of Mauritania provided a number of recommendations focused on addressing slavery in Mauritania.

In 2015, MRG, together with Anti-Slavery International, SOS-Esclaves, IRA, Society for Threatened Peoples and Unrepresented Nations and Peoples Organisationm published a report outlining the systematic failures of Mauritania’s justice system to provide redress to slavery victims. While significant amendments to the anti-slavery legislation in 2015 were welcomed, slavery victims continue to encounter significant barriers to redress.

In January 2018, MRG welcomed the landmark ruling of the African Committee of Experts on the Rights and Welfare of the Child  (ACERWC) in the case of Said and Yarg Salemagainst Mauritania.